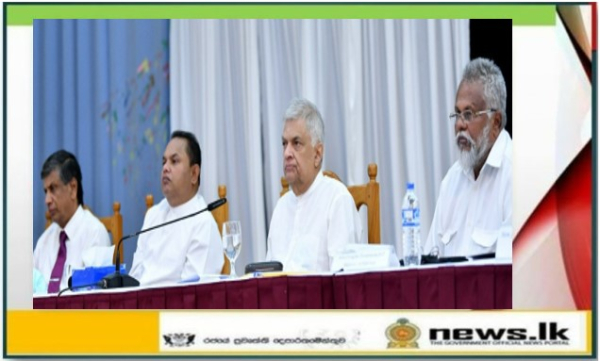 The President made this observation during the District Development Progress Review Meeting held at the Vavuniya Town Hall today (19).

The statement made by President Ranil Wickremesinghe is as follows;

“It is clear to us that the government’s program for food security has been implemented in Vavuniya, Mannar, and Mullaitivu Districts. Four officers from each Divisional Secretariat have been appointed for the implementation of the food security program.

The liquid milk industry would be developed in the Northern Province under Indian aid. Particularly, you were called on this occasion to raise awareness of the food shortage in the country and to discuss the implementation of the food security program. We hope to address the imminent food shortage issue in the country. It is planned to continue this program until the end of 2023. We will consider later if this program is required to continue. A global food shortage may be imminent and this food security program is important to protect Sri Lanka in the face of this imminent danger. Africa is already suffering from food shortages.

The country’s Maha season cultivation is successful and if other crops also achieved similar success, we can face the food shortage easily. Apart from that, we have to control malnutrition and protect the yield. We should take measures to minimize wastage during harvesting. We would strengthen the food storage process and supply them to customers. Vavuniya and Mannar Districts have a big responsibility in securing the available surplus food.

Several issues related to education and health in these districts were revealed during the discussions and we hope to provide solutions to address them soon. We have planned to work with the International Monetary Fund IMF) which would enable us to create considerable growth in the economy. We have to make massive changes in the export economy and move towards to a larger foreign exchange-earning economy.

I have presented proposals in the 2023 budget to achieve this end in which the North too have to play a pivotal role. One should remember not only Jaffna but Vanni too has a significant role in it.

We need to pay attention to a new energy economy of which the main region would be the Northern Province. We can earn a lot of foreign exchange through this project. There is an opportunity to earn foreign exchange by exporting food to the Middle East and Singapore. We would open opportunities for growing new crops including cinnamon.
Vanni has a great responsibility in animal husbandry which has a significant place in the five-year plan from 2023 to 2027.

We are studying the possibilities of transforming the Vavuniya Airport into an international airport and I require the support of the people of the North to realize it.”
The President also inquired from the Divisional Secretaries regarding the progress of the food security program in the Vavuniya District.