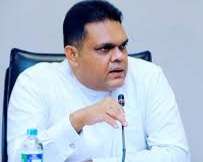 There has been no discussion held about siging the Millennium Challenge Corporation (MCC) agreement by the present government as yet, State Minister of Finance Shehan Semasinghe said today.

He said this while responding to a question raised by SJB MP Chaminda Wijesiri whether there was any move to sign the MCC agreement by the present government.

The Minister told Parliament that the Gotabaya Rajapaksa government decided not to proceed with the MCC agreement following the recommendations of a committee appointed to look into the agreement.

He said there was no obstacle for a new government to take a different policy decision on contrary to the one taken by a previous government.

“There could be a difference between the policy decisions taken by two different governments. Gotabaya Rajapaksa government decided not to sign the MCC agreement. Similarly the present government also could take a different stance. It is upto the head of the government and the Cabinet to decide on the matter,” he said.

MP Wijesiri said there were plans to hand over state assets to China or India through the MCC agreement under the so-called debt restructuring process.

The Minister said there was no links between the debt restructuring process with China and MCC agreement. (Ajith Siriwardana and Yohan Perera)