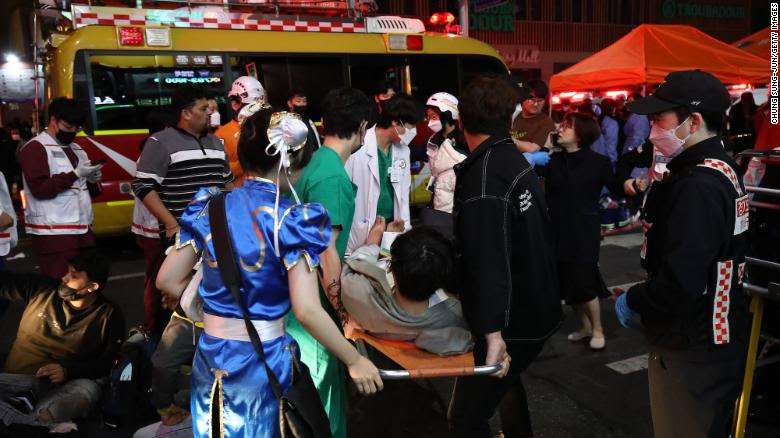 South Korea's first big Halloween celebration since the end of Covid restrictions turned to tragedy on Saturday night, when at least 149 people, mostly teenagers and young adults, died as partygoers surged through a narrow alley in a popular nightlife district in Seoul, officials said.

Authorities are still investigating what caused the incident, but Choi Seong-bum, chief of the Yongsan-gu Fire Department, said it was a “presumed stampede” and that many people fell, injuring at least 76 people.

Revelers had poured into the Itaewon nightclub district to enjoy South Korea's first Halloween celebration since crowd limits and face mask rules imposed by the Covid pandemic were lifted. Witnesses said that even before the chaos broke out, partygoers were packed so tightly in the narrow streets that it was difficult to move around.

I saw people going to the left side and I saw the person getting to the opposite side. So, the person in the middle got jammed, so they had no way to communicate, they could not breathe,” Witness Sung Sehyun told CNN. He said the space was like a “jammed subway.”

Authorities received the first reports of people “buried” in crowds around 10:24 p.m. on Saturday night.

Yonhap News Agency reported that some people had suffered from “cardiac arrest,” attributing the statement to fire authorities. Emergency officials assisted at least 81 people in Seoul's Itaewon neighborhood reporting “difficulty breathing.” But early suggestions of a gas leak or fire were discounted.

Police closed off the area and social media videos showed people wearing Halloween costumes lying in the streets and on stretchers as first responders rendered aid and queues of ambulances formed to take away the injured.