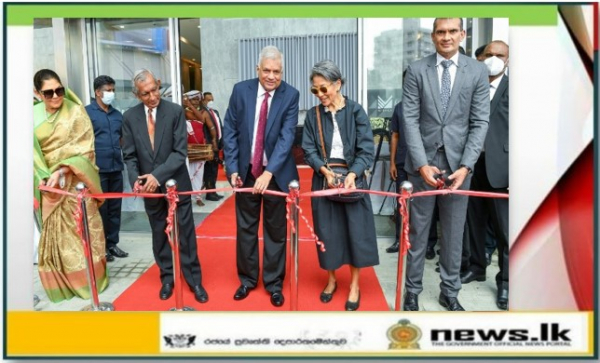 The President said this addressing the gathering at the Mireka Tower Opening Ceremony at Havelock City in Wellawatte yesterday (20), where he was the Chief Guest.

The President also said that laws that had been introduced under the Greater Colombo Economic Commission (GCEC) will be re-enacted to introduce an efficient system replacing the existing slow process, to encourage foreign investment.

The President further said that he had already appointed a committee to bring the Board of Investment (BOI), the Export Development Board (EDB) and the Sri Lanka Export Credit Insurance Corporation (SLECIC) together onto one platform and establish one investment promotion agency to encourage foreign investment in Sri Lanka.
He further added that Sri Lanka needs to be made an investor-friendly country to attract foreign revenue and get out of the vicious cycle of foreign borrowing.

The statement made by President Ranil Wickremesinghe is as follows;
“This complex, Havelock City is a tribute to Mr S. P. Tao and his commitment to Sri Lanka. I told Mildred, now you are virtually a Sri Lankan citizen. So let’s think of where the next investment is going to be. I first got to know Mr Tao in 1994 as I became the Prime Minister. He had started at the World Trade Center and after President Premadasa passed away, the late Sirisena Cooray brought him along to meet me. That’s how our first contact started. I met him many times, and not only the late Mr S. P. Tao but also Mildred Tao. Then I must say, the commitment is such that during the attacks, a lot of people wanted to pull out.
Instead, when I asked Mr Tao, he said, ‘no, I’m going to stay here. So first, thank you for that confidence in Sri Lanka’s future. When you crossed over and I was Prime Minister in 2003, again, I met S.P. Tao and he has been meeting me on and off, and he wanted to start a new project.
The new project came along and they were looking at the Havelock town, Wellawatte Spinning and Weaving Mill land that was abandoned. So some people asked why we wanted to give it. We can have some industrial business there. But I said Havelock town started as a residential area. So let’s look at this. This will be the start of the Havelock city development.

I had known this place earlier when I was young and the Wellawatte Spinning and Weaving Mills were operational. I used to come here when Mr Solly Captain’s father was in charge of the mills. We used to have lunch there and also we were taken along to see the mills. Then in 1975 when I entered politics, President J. R. Jayawardena was the MP for Colombo South and he asked me to take over Wellawatte North. At the time this area was known as Wellawatte North Ward.
I used to come here and one of our meeting places was the old worker’s residence at the other end of the complex. So, I told Mr S. P. Tao, that whatever he does, to ensure that the workers who lived there were looked after, which he did. So I was more than happy. Here was the area that I had known when I was first in charge and I thought why not. I took over Biyagama next and started zones there.
So, I thought, why not have one zone in Havelock town and no better person than SP Tao to start it off? So it is this venture’s results which we see today. Many people were involved in it. I see Rohini Nanayakkara, who was involved in this project from the very beginning.
She doesn’t want me to reveal her age. Okay, I will not reveal your age, I am only saying that you were involved. There’s Ajith Jayaratne and many others who were involved in the project. So I must again say thank you. I am saddened that Mr S. P. Tao is not here. After all, he had lived to 105. Nevertheless, this is a tribute to Mr S. P. Tao.
So I look forward to another investment, as I said, from the company. That will have to be Mildred’s investment. This is Mr S. P. Tao’s investment. So now you got to make one for Mildred. However, I must say that we have to now seriously look at foreign investment, replacing foreign loans, as our main source of income.
We have to become an export-oriented economy, and we have to keep increasing our foreign investments. Now, if we are to keep increasing our foreign investment, we must have an outward-looking economy. We can’t have an inward-looking economy. So, now as the economic stabilization is taking place, and the discussions are on between Japan, China and India, about the main creditors, on how to restructure the debt, we are also looking at how we can now revive growth.
One of the biggest issues we have is the number of government agencies that investors have to pass through. You go through BOI, Tourist Board, or some other ministry, then you go to Port City and then you come back to where you started. Then you do a second round. After about ten years, you can get the investment through. This just won’t work. When we came in 1977, we started the Greater Colombo Economic Commission (GCEC). There, the decisions were taken quickly and really in ten years, we got four zones going that is Katunayake, Biyagama, Koggala and Seethawaka. Then there was Pallekele which Mr Wijethunga wanted. Thereafter, what are the big investment zones that we have started?

The whole system has broken down. The Tourist Board is where people go around for various fairs and come back after they have had a good holiday. Therefore, I appointed a committee which is now looking at the whole structure and the investment authorities. What this committee is recommending and working on is that the BOI the EDB and Sri Lanka Export Credit Insurance Corporation (SLECIC) are brought together as one investment promotion agency.
Secondly, the industrial estates and investment zones will be broken off. I think Katunayake and Biyagama are the best zones in South Asia. We are now looking at thousand-acre zones and initiating them from Bingiriya, then Hambantota and Trincomalee. A separate corporation will handle these.
Then we have to look at the laws. We have to cut through these laws and go back to the GCEC system. When the investment is made, the organization has two weeks to make their remarks and the thereafter-final decision is taken. That is the only way. Next is to develop the quality of human resources, and manpower available and look at the infrastructure.
If these steps are in place, we won’t need 40-year tax holidays. We should have an efficient bureaucracy and efficient infrastructure to ensure that investment can take off. Therefore we would be focusing mainly on zones, whether it be for manufacturing, IT or even tourism, rather than have people located everywhere they want. We could expedite matters earlier under the GCEC because we had an efficient system.
So this is the new system, we are looking at. How do we open up? There will be many laws that will be changed and there will be some who will object and say that we are betraying the country. So remember that propaganda will go on. But we must have fast growth. We have gone down. It doesn’t mean we have to stay down.
Sri Lanka can be like a football. You hit it, send it down and then it bounces back up again. So that’s what we have to be and we must go all out. We have several people leaving the country. That’s okay. We can’t stop that. We must train more people. We are modernizing the education system. So that’s what we are working on while we are looking at stabilization measures which we are working on with the IMF.
Certainly, we are also looking at modernizing the economy, looking at the industry and how we can go ahead. Another area of interest is going to be modernized agriculture. There’s so much land available. I thought I’d share with you what we are now working on because by the end of the year will be able to announce many of the measures that will be implemented by early next year to get the legislation enacted. Therefore, many measures are needed to be taken.
However, this is all to make Sri Lanka an investor-friendly country. And when investors come in, we will certainly have more employment, and higher income and we will be able to get off this vicious cycle of foreign borrowing. We can’t do this a second time. So let’s make up our minds. Let us commit ourselves to moving forward to promote greater foreign investment.

Before I conclude, I would like to say that Mr S. P. Tao, had a lot of faith in Sri Lanka. He looked at the locations and said, this is a good point. Even better than China or India. I too share the same view. So let’s hope it succeeds.
Thank you.”