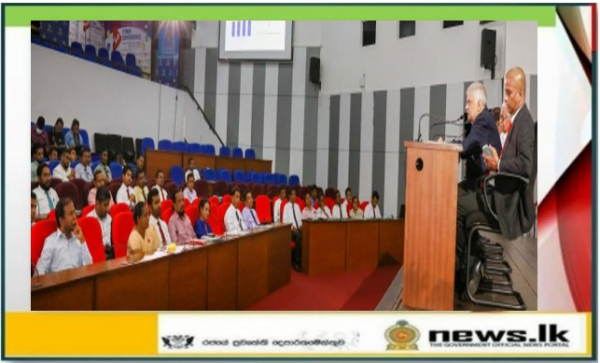 Pointing out that nothing can be achieved without propaganda, the President called on all the media secretaries to commit to revealing the government’s ‘Rebuilding the Country’ program to the people without delay.

President Ranil Wickremesinghe said this while addressing the workshop held today (07) at the Government Information Department to apprise the press secretaries of all cabinet ministers, state ministers and governors about the state communication mechanism.
It is noteworthy that the President joined the event without prior notice.

The President noted that ministry press secretaries hold the prime responsibility in publicizing the development and policy programs of the government, and in this workshop, the press secretaries were informed about the importance of maintaining optimal coordination between the Government Information Department, the President Media Division and the Ministries to maintain a strong state communication mechanism.

“Holding such workshops is a timely. I do not expect to comment at length here. I have spoken enough. Now it is time to convey the essence of my utterances to the country. The program of the government has to be conveyed to the country. We are facing very difficult times. I don’t think such a situation has been faced during the 20th century or even prior to that. We have to get out of this. Many people have lost hope. We must correct that situation. We have to publicize the government’s program.

Unlike Print and electronic media, currently we are all facing social media problems. It carries positive as well as negative information, which is one of the major problems that the entire world is facing. This bad impact affects us especially at this time. Therefore, it is the responsibility of each and every one of you to address this challenge appropriately. If you do not accomplish your responsibility, the whole country will face more problems. The reason that you are here today is for you to understand this message. I learned that all media secretaries have been invited to this workshop. However, according to the attendance sheet, only about 83% have participated in this workshop. We need to find out who was not present today. Since these people have a responsibility of conveying news to the media and how to correct the misconceptions, there is a major publicity campaign in this regard. Nothing succeeds without publicity.

In addition, there are numerous other programs. You should be aware of that too. The programs such as the 75th Anniversary of Independence in 2023. According to the idea of the former Speaker, forming of Public Councils (Jana Sabha) will take place next week. There is a great responsibility in organizing such programs. It is important to get publicity for these programs.

Also, I have suggested to convene this group once in 03 months and discuss with them. I would like to thank the chiefs in charge of our media departments who are conducting this program as well as the Editor-in-Chief of Lankadeepa.”