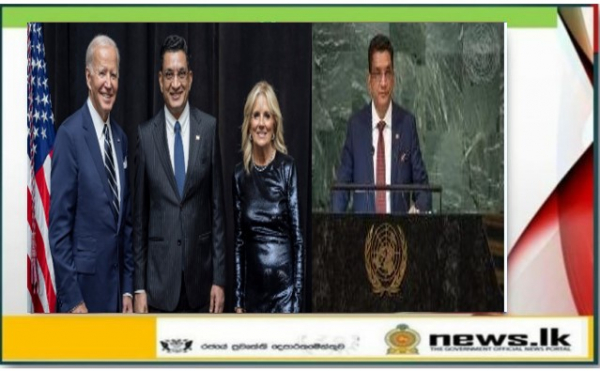 Minister Sabry, addressing the General Debate on Saturday, 24 September, stated that the external and internal challenges faced by Sri Lankans provide an opportunity to implement political, social, and economic reforms that will lead to recovery and prosperity and build back better. He called on the international community and the United Nations to assist Sri Lanka in this endeavor and underlined that this was a watershed moment in history which required solidarity and collective effort by the international community as the complex and interconnected crises cannot be resolved by nations acting on their own.

The Foreign Minister also called on Secretary General of the United Nations Antonio Guterres who assured the support of the United Nations system in mobilizing assistance for Sri Lanka in the pandemic recovery process. The visiting Minister met the President of the United States Joe Biden at a reception hosted by the US Head of State to heads of delegations to the 77th UNGA Session during which he also met with Secretary of State Antony Blinken.

The Foreign Minister also delivered statements at other High Level Meetings, including the meeting to commemorate the 30th Anniversary of the Declaration on the Rights of Persons belonging to National or Ethnic, Religious and Linguistic Minorities; Ministerial Meeting of the Non- Aligned Movement (NAM), convened by the Republic of Azerbaijan as its current Chair; the 46th Annual Meeting of Ministers for Foreign Affairs of the Member States of the Group of 77, hosted by the Islamic Republic of Pakistan; and an informal meeting of Foreign Ministers of the Conference on Interaction and Confidence Building Measures in Asia (CICA). He also joined a Ministerial Meeting of the Group of Friends on the Global Development Initiative, convened by the People’s Republic of China, where the Ministers discussed how the initiative could better assist its members in achieving the 2030 Agenda for Sustainable Development.

On the sidelines of the High-Level Session of the UNGA, Minister Sabry met with Ministers of Foreign Affairs from the Kingdom of Saudi Arabia, Uzbekistan, Armenia, Somalia, The Gambia, Namibia, United Arab Emirates, China, Kuwait, Pakistan, Iran, Iraq and Sudan, exploring avenues to enhance bilateral relations in terms of trade and investments and mutual cooperation in multilateral fora. He also met with Minister at the Foreign, Commonwealth and Development Office of the United Kingdom Lord Tariq Ahmad, during which the United Kingdom pledged Sterling Pound 3 Mn in assistance to Sri Lanka. Nepal Foreign Secretary Bharat Raj Paudyal called on the visiting Minister and discussed matters of mutual interest.

Foreign Minister Sabry met the Under-Secretary-General of the United Nations Counter-Terrorism Office Vladimir Voronkov; Under-Secretary-General for Political & Peace building Affairs Rosemary DiCarlo and Assistant Secretary General of the United Nations Development Programme (UNDP) Kanni Wignaraja, where discussions were held on the advancement of Sri Lanka’s engagement with the wider UN system in the areas of counter terrorism, peacebuilding and development.

Under-Secretary of State for Political Affairs of the United States and the Deputy Administrator of USAID Isobel Coleman called on the visiting Minister and discussed USA-Sri Lanka engagement to address the economic challenges in Sri Lanka.

The Foreign Minister also addressed a representative gathering of the Sri Lankan community in the tri-state area at a reception held at the Permanent Mission of Sri Lanka to the United Nations.

The Permanent Mission of Sri Lanka to the United Nations