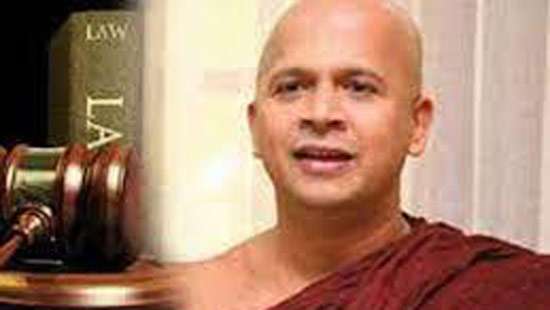 Colombo Chief Magistrate's Court today issued a warrant for the arrest of Ven. Uduwe Dhammaloka thera of Alan Mathiniyaramaya Temple in Polhengoda for not appearing in Court over a private plaint filed against him for allegedly using loudspeakers in a manner of causing nuisance.

When case came up before Colombo Additional Magistrate, Dhammaloka thera was not present in Court. Further magisterial inquiry put off for October 31.

On December 6, 2016 the Court had issued a conditional order preventing Ven. Uduwe Dhammaloka thera from using loudspeakers in a manner of causing nuisance at Alan Mathiniyaramaya Temple in Polhengoda between 5.00 a.m. and 6.00 a.m.

The Court had made this order taking into consideration a private plaint filed by six parties including former Minister Milinda Moragoda and Centre for Environmental Justice alleging that loudspeakers used by Ven.Uduwe Dhammaloka at Alan Mathiniyaramaya Temple in Polhengoda was causing an annoyance and disturbance to the residents.

Through this private plaint, the six complainants sought the Court’s jurisdiction to avert noise pollution taking place in the area in terms of the section 98 of the Criminal Procedure Code.

The six complainants Gavinda Jayasinghe, Dr.Kalinga Kaluperuma, Diren R. Halok, Milinda Moragoda, Kamalesh Johnpillai and Centre for Environmental Justice informed Court that they were compelled against their will to listen to the amplified sounds which emanate from the loudspeakers at the Alan Mathiniyaramaya Temple. They said the authorities have turned a blind eye to their complaints made on several occasions.(Lakmal Sooriyagoda)