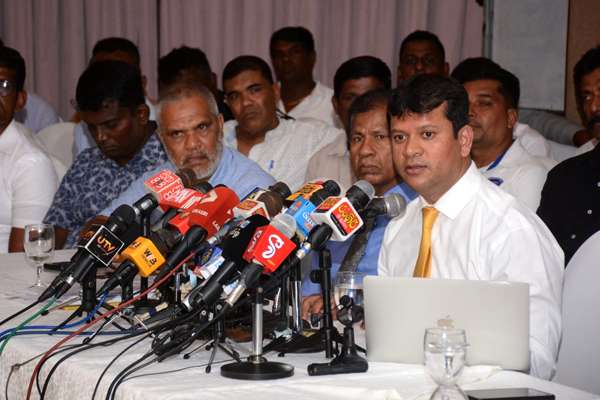 Football Sri Lanka (FSL) President Jaswar Umar today warned that there is a great danger of the world football governing body – the FIFA banning Sri Lanka in the coming days.

According to unconfirmed reports, Sports Minister Roshan Ranasinghe had instructed authorities to appoint a three-member Interim Committee to manage FSL through a gazette notification.

Addressing a media conference in Colombo, Umar said that Sri Lanka’s conduct has been under observation by the FIFA for years and with strong disapproval.

“If the ongoing crisis in the game’s local administration continues further for the worse the FIFA will surely ban this country,” Umar explained

“This is a crisis caused by the fight for the top posts of the FSL by a few power-hungry elements.”

“Elections for the FSL should have been held by May 31, but an extension was given with an October 31 deadline. Now the Sports Minister has suspended holding of elections.”

“As per the latest development the official time of the football federation is over with effect from September 15. It was reported that the Sports Minister would appoint an interim body of administration or place the game under a competent authority.”

“However, when we made inquiries, Director General of Sports Amal Edirisuriya said that he had not been officially informed of such plans.”

“The involvement of a third party in the administration of the game will result in FIFA banning this country. Such a ban would place us in further trouble in the international fora.”

“It will first disrupt the ongoing training of the national football team in Qatar and Sri Lanka’s Under-17 Team’s tour to Uzbekistan for the Asian Cup on October 2.

Umar said the administrative crisis had its origins in corrupt elements in the game targeting the top posts of the FSL from where billions of rupees had been siphoned off.

“The FIFA is closely observing the situation. Many have been misled about this crisis or bought over by them. This country has lost its credibility before FIFA,” Umar added.