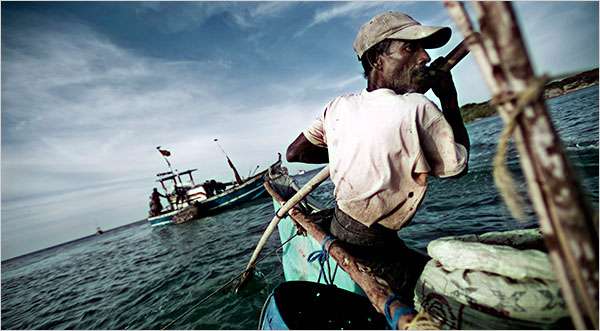 Fishermen in Northern Sri Lanka raised concerns over the presence of Chinese firms in the country’s marine industry, especially in the Jaffna Peninsula and the possible effect it could have on the ecology.

While stating that the war-affected region is in need of investments, President of the Jaffna Fisheries Federation Annalingam Annarasa said the sea cucumber farms set up by Chinese companies will bring more harm than benefit for the residents.

He said these farms could adversely affect the local marine ecology on which their livelihoods rely.

However, against this backdrop, over 600 fishermen in the North have switched to sea cucumber farming in the coastal belt of Jaffna and Kilinochchi where the Chinese firm started a sea cucumber hatchery five years ago.

Meanwhile, In June 2022, the Sri Lankan Government approved a proposal for a large-scale commercial sea cucumber project spanning 5,000 acres in Jaffna, Mannar, Kilinochchi and Batticaloa Districts in the north and east.

It was reported that Sri Lanka, which is going through an economic crisis, earned a significant amount of foreign exchange by exporting sea cucumbers.

Accordingly, this proposal submitted by Fisheries Minister Douglas Devananda was given Cabinet approval. The National Aquaculture Development Authority functioning under his ministry is leading the initiative.

Mr. Devananda said Sri Lanka needs both investment and technology in the north to cultivate sea cucumbers. “I have been asking India for five to six years but have not had any response. We must explore other options, right? We are only talking to a Chinese firm, no project has been finalised yet,” he was quoted as saying early this month.

However, the local fishermen in the Northern Province, who are already resisting other Chinese sea cucumber farms in the region, have opposed the proposed project.

The poor fishermen fear loss of marine resources and livelihood due to these farms and have demanded a moratorium on such proposals till a detailed study is carried out on the impact of sea cucumber farming on the environment and the fishermen community.

Local fishermen from Northern Sri Lanka consider the government's thrust on commercial aquaculture a threat to their livelihoods and land. While the government is trying to promote the projects claiming that they will provide jobs for the locals, fishermen believe that the farms would lead to lasting damage to the local marine ecology on which their livelihoods depend. Notably, a similar Chinese project in the Kilinochchi District faced stiff opposition in 2021 from local fishermen who objected to the fencing of the land adjoining the sea, restricting access to even locals.

Reacting to the dire need for Chinese investment in the sector, local fishermen counter that present Chinese investments are fewer compared to the proliferation of some 250 sea cucumber farms in the north in recent years. Annarasa alleged that even local investors were not from the fisher community but were politically well-connected and influential.

Sri Lanka’s decision to allow opening up of more China-backed firms is being considered as a part of its steps to tackle the ongoing foreign exchange crisis in the country.

Various Chinese companies and entities have firmed up proposals aimed at gaining long term control of Sri Lankan marine resources. Farming of sea cucumbers in Sri Lanka is one such area which China seems to be eyeing. According to local media reports, Sri Lanka exported about 336 tonnes of sea cucumber to China, Singapore and Hong Kong in 2021. Hence, breeding and exporting the sausage-shaped marine animal which is considered a delicacy in China and South-East Asia is a lucrative business for Chinese companies. Locals do not consume sea cucumbers.

A Macau based Chinese company Chunmanm Cultural Business Group (CCBG) reportedly offered to set up a large scale sea cucumber farming project in Puttalam & Jaffna Districts. The proposed project would encompass more than 36,000 acres of sea to produce 8.6 million kg of sea cucumber worth USD 450 million. The 10-year project will however consume 5,000 acres of aquaculture waters per year, which may cause serious marine depletion.

Allegations around ecological damage due to Chinese projects are not new for Sri Lanka. Several instances of environmental violations found place in public debates during the construction work on Mattala Rajapaksa International Airport; also known as the world’s emptiest airport project. The airport was built on elephant habitat and the displaced animals are frequently found roaming near the runway. Similarly, environmental impact assessments of the Southern Highway extension and the Colombo Port City project highlighted serious concerns. The port city project involves large scale land reclamation south of the Colombo harbour and the construction of a new financial district. Coastal communities fear that the construction work by China Harbour Engineering Company (CHEC) will lead to coastal erosion and harm marine life. Incidentally, the CHEC has also shown interest in developing fisheries harbours for the state owned Ceylon Fishery Harbour Corporation in Western and Southern Sri Lanka.

While the present balance of payment problems are making Sri Lanka look at all possible avenues for investments, a dubious Chinese record in environment conservation should push the government into a rethink over the proposed aquaculture projects.