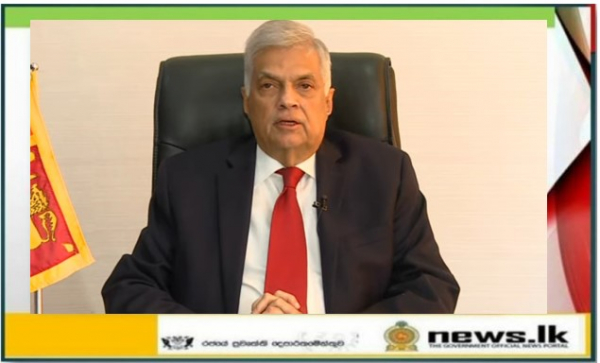 The President said this in a special letter  ( Sep 23) addressed to the Maha Nayaka Theras’ of the Malwathu, Asgiri, Amarapuraand Ramanya Chapters about the difficulties faced by religious institutions due to the electricity tariff revision.

In his letter, the President has said that the electricity crisis has arisen as a direct result of the country’s snowballing economic crisis over the last few years, and that he sees it as the responsibility of the government led by him to resolve all these issues in a systematic manner for the benefit of the people and the entire religious community of the country.

By 2022, 42,950 Buddhist temples and other registered religious and social services in the country are connected to the country’s main power grid. In 2021, 91 million units of electricity (91 Gwh) have been provided.

Even under the new electricity charges, the highest monthly electricity bill of 33,214 registered Buddhist temples and other religious and social services, is less than Rs. 4,000. Only the nearly 9,800 locations that consume more than 180 units have higher charges.

The President has also mentioned in his letter that temples and other religious places with high electricity consumption will be identified and a proper study will be done to provide a continuous service for electricity demand management and electricity conservation to those places with the intervention of the government mechanism, under the leadership of the Ministry of Power and Energy. He noted that a program is necessary to appoint energy managers from among the lay people who are dedicated to the religious and social mission of taking care of the religious places and to provide them with formal training and to survey the work on a monthly basis.

President Ranil Wickremesinghe pointed out that it is very practical to install solar panels to religious shrines that have to pay very high electricity bills, adding that instead, opting for alternative mechanisms would only serve to provide short term relief.

He said that these solar panels could be provided to these establishments at cost or they could be provided with the required funds to import such solar panels. The President also added that a suitable mechanism would be drawn up based on the advice and input of the Mahanayaka Theras and based on priority basis, these solar panels could be installed so that it will not hamper any of the religious events planned at these religious establishments in any manner. He noted that this endeavour is to ensure that the daily, monthly or annual religious rituals could be carried out without hindrance for the benefit of society.