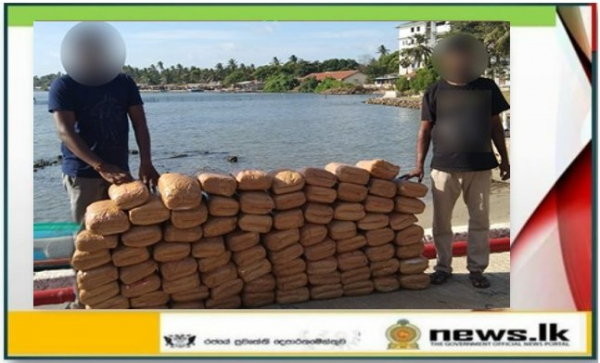 With a view to preventing an assortment of smuggling attempts and other forms of illegal activities taking place in sea routes, the Navy conducts regular operations in coastal regions of the island. As an extension of these efforts, SLNS Vijaya in the Northwestern Naval Command made this apprehension, after searching a suspicious car parked near a house in Ilanthadiya area. The consignment of Kerala cannabis found in the vehicle were in 78 packages which weighed about 155kg and 450g. Meanwhile, the Navy also took hold of 02 suspects with another car and 02 motorcycles, believed to be used for the racket, from the location.

The street value of the consignment of Kerala cannabis held in this operation is believed to be over Rs. 46 million.

Meanwhile the 02 suspects were identified as residents of Ragama, age 35 and 40. The accused along with the consignment of Kerala cannabis and vehicles were handed over to the Norochcholai Police for onward legal action.