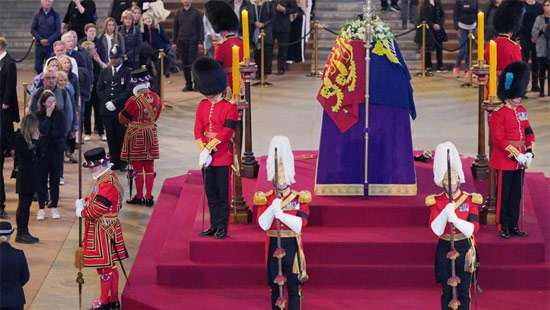 The lying-in-state ceremony for Queen Elizabeth II at Westminster Hall formally ended and the doors closed to the public ahead of her state funeral on Monday.

Over five days, tens of thousands of people had waited hours in line before filing past her coffin to pay their final respects. The funeral will take place at Westminster Abbey in front of some 2,000 guests.

Hundreds of foreign royals and heads of state are expected to attend the funeral for one of the biggest diplomatic gatherings in decades.

Westminster Abbey has space for about 2,000 people. Around 500 heads of state and foreign dignitaries along with their partners are expected, according to BBC and Sky News reports.

The longest-serving monarch in British history died aged 96 at Balmoral, her Scottish Highland retreat, on September 8 after a year of declining health.

The last state funeral to be held in Britain was in 1965 for the country's wartime prime minister Winston Churchill.

The queen will be buried alongside her father king George VI, her mother queen Elizabeth the queen mother, and sister princess Margaret, reuniting in death the family who once called themselves “us four”.

The coffin of her husband, Prince Philip, who died last year aged 99, will also be transferred to lie alongside her.