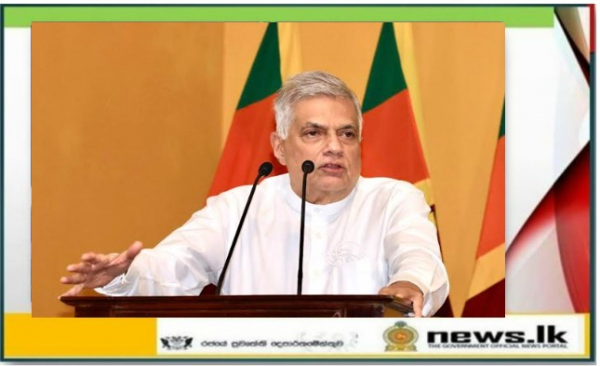 Pin
Share With Your Friends!
FacebookTwitterWhatsAppMessengerRedditLinkedInCopyShare
President Ranil Wickremesinghe commended the award-winning athletes and cricket and netball teams for setting an example to the rest of the country that despite setbacks and shortcomings they had to endure over the years it was their determination and fighting spirit that helped them achieve victory against all odds.
He said this during a felicitation ceremony was held for the Sri Lankan Netball team that won the Asian Championship, the cricket team that won the Asia Cup and the winners of the Commonwealth games.
The event was held at the Cinnamon Hotels and Resorts in Colombo, under the patronage of President Ranil Wickremesinghe.
In accordance with a request made by the Sports Minister Roshan Ranasinghe, each member of the victorious netball team received a reward of Rs. 2 million each, which was gifted by the Sri Lanka Cricket as a goodwill gesture of sporting comradeship.
In addition, the Commonwealth Silver Medalists received Rs. 10 million each, while Bronze Medalists received Rs. 5 million each. The coaches of the winning athletes were also felicitated during this event and they were accorded 25% of the cash rewards presented to the athletes. These rewards were made available from the sports fund.
Sri Lanka won 4 medals in the 22nd Commonwealth Games held recently in Birmingham, Britain. Palitha Bandara won the silver medal in the discus throw in the para sports category, while Yupun Abeykoon won the 100m event, Nethmi Ahimsa Poruthota in the women’s 57kg wrestling event and Dilanka Isuru Kumara won the bronze medals in the 55kg weightlifting category.
The awards ceremony was organized by the Ministry of Sports and Sports Associations, with the official sponsorship of Dialog Asiata and hosted by Cinnamon Hotels and Resorts.
Addressing the gathering at this event, President Ranil Wickremesinghe said thanked the athletes for setting an example to the rest of the country that despite the setbacks and shortcomings they had to endure over the years it was their determination and fighting spirit that helped them achieve victory against all odds.
The president acknowledged the shortcomings the sportsmen and women face in this country and gave an assurance that these shortcomings would be addressed. “If sports is to be developed, then we must commit to it wholeheartedly. Committing to it halfway will never work.”
He also thanked the Sri Lanka Cricket team for their resilience even after defeat during the recent past. “This is a very valuable victory for us and I hope you will bring us further victories in the future which would make us even happier.”
He said that the cricket team has taught the country a good lesson. “They did not get discouraged even after losing to Afghanistan. They kept their faith and fought on and achieved victory. This is a good lesson for all of us. Dasun and his team has shown us that we can rise up against all odds. Today we are worse off than Afghanistan, but if we rise up against all odds, like Dasun and his team, I am certain we can reach victory too. Some think Sri Lanka is doomed and there is no way out. But like Dasun I am confident that we can come out of this crisis. We can not only become the best in Asia, but we can become the best in the world.”
President Wickremesinghe also said that these teams have also shown the country that one must not only expect to get from the country, but each one must also commit to giving back to the country. “I thank all these sportsmen whether it is cricket, netball or athletics, at the way they performed at the Asian Cricket tournament, the netball tournament and at the Commonwealth Games. They brought pride to us. More than that they returned to the country what they owe to the country. These were people who got the best of the country, they got the education, like all of us and then they did not run away. They did not lose hope. Each went and played the game. Each went and took part in the events and they came back with honours. So, we have to remember in a time of crisis that it is not for us to think what is it that we can get out of our country but what is it that we can give back to our country,” the President said, adding that it is what the whole country has to learn.
Sports Minister Roshan Ranasinghe, Director General of Sports Amal Edirisinghe, President of Sri Lanka Cricket Association Shammi Silva, President of Netball Association Victoria Lakshmi and others were present on this occasion.
President Media Division (PMD)

( Information from news.lk was used in this report. To Read More, click here | Also if you have any problem of this article or if you need to remove this articles, please email here and we will delete this immediately. [email protected] or stevenbarker1021[email protected] )