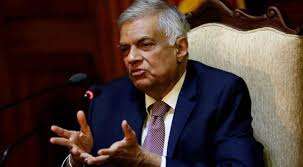 Sri Lanka will revive its Free Trade Agreement(FTA) with India and upgrade it to “a comprehensive economic and technological partnership”, President Ranil Wickremesinghe said on Thursday, signalling Colombo’s willingness to revisit a stalled pact.

“We will revive and upgrade the FTA into a comprehensive economic and technological partnership. We started that in 2018 and 2019,” he said referring to the Comprehensive Economic Partnership Agreement (CEPA) that was later known as the Economic and Technical Cooperation Agreement (ETCA). Both versions of the proposed agreement sparked stiff resistance within Sri Lanka, as critics feared it would impact Sri Lankans’ job prospects with more competition from Indians.

“We look forward to trade integration in many areas with the RCEP [the China-led Regional Cooperation Economic Partnership], with the EU, but the cornerstone of this is to achieve trade integration with India,” Wickremesinghe noted.

The current Indo-Sri Lanka Free Trade Agreement (ISFTA) came into effect in 2000 and several rounds of bilateral discussions later, Colombo and New Delhi are yet to reach an agreement on its upgraded version. Wickremesinghe, as Prime Minister between 2015 and 2019, attempted to sign an upgraded trade pact with India, but was unsuccessful.

Mr. Wickremesinghe reiterated that his government is looking into India’s bilateral development cooperation projects in Sri Lanka and set up an international trade office for negotiations. The “slow” pace of the projects has remained a concern for New Delhi.

Speaking of areas with potential for bilateral cooperation, Mr. Wickremesinghe referred to the “long-term energy solution”, the power grid connection between India and Sri Lanka, offshore wind energy, the solar power plant at Sampur and the renewable energy projects on three islands of Jaffna Peninsula. “We have a tremendous scope of potential renewable energy, and India has stepped in first,” he said. Citing the Trincomalee Oil Tank Farm project, being developed with Indian assistance, as having “big potential”, President Wickremesinghe said Sri Lanka would further develop itself as a logistics hub. “Together with India, Adani Group has already taken over part of the West terminal at the Colombo Port,” he said, underscoring the scope for private investment both ways.