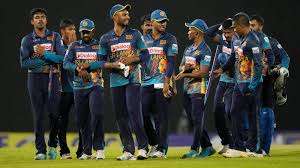 Sri Lanka Cricket (SLC) announced the 15-member squad who will represent Sri Lanka at this year’s T20 World Cup to be held in Australia from October 16 to November 13.

Fast-bowlers Dushmantha Chameera and Lahiru Kumara have both been named in the main squad, but their inclusion remains subject to fitness.

Dasun Shanaka will lead Sri Lanka in a global tournament for the second time, leading a team brimming with confidence after their Asia Cup heroics.

Dilshan Madushanka and Pramod Madhushan who impressed in the UAE have earned their inclusion in the traveling party, but there was no room for Matheesha Pathirana or the returning Binuru Fernando.

The selectors have also opted to keep faith with Danushka Gunathilaka despite his lean run of form in 2022.

Leg-spinner Jeffrey Vandersay makes the squad as backup spinner, while the rest of the squad largely selected themselves on account of their recent form.

As was the case in 2021, Sri Lanka would need to make their way through the Preliminary Round of the tournament to qualify for the Super 12 stage owing to their position in the ICC T20I Rankings as of the cut-off date for direct qualification.

Sri Lanka will therefore face Namibia, the UAE and the Netherlands – needing to finish in the top two of their group – prior to joining the tournament proper.