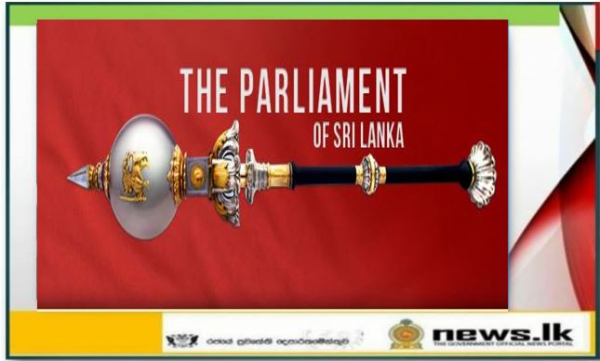 Pin
Share With Your Friends!
FacebookTwitterWhatsAppMessengerRedditLinkedInCopyShare
The Resolution to constitute the Parliament Committee designated “National Council” is scheduled to be debated on the 20th from 10.30 am to 5.30 pm, following which, the approval of the Parliament is to be obtained, the Secretary General of Parliament Mr. Dhammika Dassanayake said.
This was decided at the Committee on Parliamentary Business held today (14) under the chairmanship of Hon. Mahinda Yapa Abeywardana, Speaker of Parliament. The Resolution to constitute the Parliament Committee designated “National Council” was included by the Addendum to the Order book issued on September 9th.
Parliament is scheduled to meet from the 20th to the 23rd and Questions for Oral Answers have been scheduled to be taken up from 9.30 am to 10.30 am except Friday the 23rd.
The Secretary General stated that it was decided to hold the adjournment debate brought by the government on the “Necessity of increasing the Government Revenues” from 10.30 am to 5.30 pm on the 21st.
On September 22nd, from 10.30 am to 12.30 pm, the Sri Lanka Rupavahini Corporation (Amendment) Bill (Second Reading) and a Regulations under the Civil Aviation Act are to be passed fowling debate. Thereafter from 1.00 pm to 4.30 pm, the amendments to the Standing Orders of the Parliament are scheduled to be debated.
Thereafter, it was also decided to take up Questions at the Adjournment Time from 4.30 p.m. – 4.50 p.m. and from 4.50 p.m. – 5.30 p.m. the Motion at the Adjournment Time by the Opposition is scheduled to be taken up.
Furthermore, it was also decided that on Friday 23rd September from 9.30am to 12.30pm Condolence on the demise of Her Majesty Queen Elizabeth II is scheduled to be taken up and from 1.00 p.m. – 5.30 p.m. to hold the Continuation of the Vote of Condolence on the late Hon. Amarakeerthi Athukorala, Member of Parliament
In the meantime, the Serjeant at Arms drew the attention of the committee towards the need to relax restrictions imposed on visiting the Parliament due to the covid situation and security reasons.
Thus, as a preliminary step, the Secretary General also stated that there was agreement to give permission to the parties who request to visit the Parliament, including school children, on days when there are no parliamentary sittings.