The Chinese Embassy in Colombo today clarified reports related to the entry ticket of the Lotus Tower in Colombo which is being circulated on social media.

A ticket claiming to be that of the Lotus Tower is being circulated on social media with information on exemptions for Parliamentarians and Chinese Nationals.

Responding to the reports, the Embassy said that the circulating ticket was forged and responded stating to visit the tower tomorrow and buy a ticket to see it with one's own eyes.

The Embassy also shared an image of the original ticket of the Lotus Tower stating that it will be issued to the public tomorrow.

The first stage of the Lotus Tower will be declared open to the public on Thursday. September 15.

With the commencement of operations, tickets are available at the following prices: For locals, the normal pass will be Rs. 500, unlimited pass for the locals will be Rs. 2,000, and schoolchildren will be provided with the tour opportunity with the official permission of the principal of the respective school. 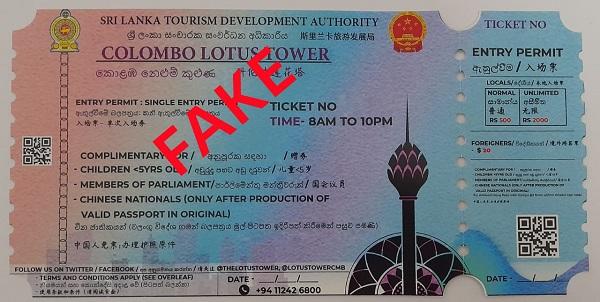