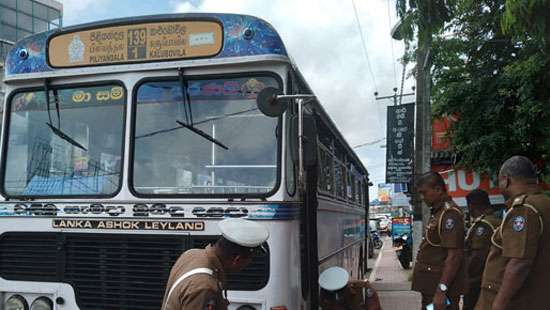 A 15-year-old youth, who had stolen a bus parked from the Piliyandala bus stand and gone to visit his girlfriend, was arrested three hours later, the Piliyandala police said.

According to the police the bus driver had gone for dinner after parking the bus at the Piliyandala stand on Sunday evening. On his return he had found that the parked bus had gone missing. He had then immediately gone to the police station and lodged a complaint. After a lapse of about three hours at around 12.30 in the morning the police had noticed the bus while it was was being driven on the road and stopped it for checking.

The suspect who was driving the bus had left the bus on the spot and taken to his heels. The police had given chase and managed to apprehend the suspect. On interrogation the suspect had admitted that he had stolen the bus because he wanted to go to see his girl friend in Moragahahena.

Further investigations revealed that the fifteen-year-old youth had also stolen a bus parked at Homagama about a year ago and had been arrested by the police while they were returning. (Bimal Shyaman)