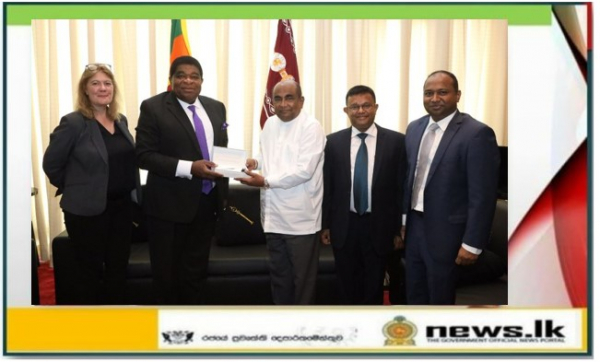 The hon. Speaker briefed Mr. Martin Chungong on the recent developments pertaining to the Parliament of Sri Lanka emphasizing the establishment of more powerful and strong Sectoral Oversight Committees which included public participation.

Hon. Mahinda Yapa Abeywardana, Speaker further conveyed the intention regarding the formation of the National Parliamentary Council inclusive of all political parties of the House for the purpose of policy guidance and prioritization of matters of national interest to be considered by the House.

Furthermore, the Hon. Speaker highlighted the need of forming an all-party Government. Furthermore, the electoral reforms and the 22 nd Amendment was also taken into discussion. Mr. Martin Chungong, the Secretary General of the Inter-Parliamentary Union commended the efforts made by the authorities in responding to the needs and demands of the people. He also highlighted the importance of youth participation and their involvement in national debate.

Furthermore, the Secretary General of the Inter-Parliamentary Union, Mr. Martin Chungong also emphasized on the need to strengthen the participation of women in politics and other vulnerable groups to ensure inclusive governance.

Mr. Dhammika Dasanayake, the Secretary General of Parliament stated that a strong media coverage with transparency similar to the House of Commons in the United Kingdom and opening Parliament to the public with information readily available would be a solution. Mr. Martin Chungong, the Secretary General of the Inter-Parliamentary Union agreeing on the said further added that it is important to keep the public informed of the activities of Parliament and that media should be responsible not to distort information for publicity.

The Secretary General of the Inter-Parliamentary Union also extended his condolences given the demise of the mother of the Hon. Speaker. He also assured working together in real partnership to strengthen Parliament and presented Hon. Mahinda Yapa Abeywardana, Speaker of Parliament with a token.

Mr. Martin Chungong, Secretary General of the Inter- Parliamentary Union (IPU) arrived yesterday (11) given an invitation extended by the President Hon. Ranil Wickremesinghe when he was the Prime Minister.