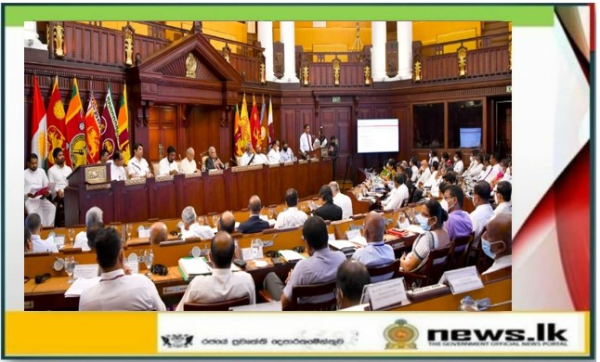 Pin
Share With Your Friends!
FacebookTwitterWhatsAppMessengerRedditLinkedInCopyShare
• No citizen should starve due to lack of food
• 07 committees for food safety
• Prioritizer eradication of malnutrition
• Fertilizer at reasonable prices for farmers
• Continuity of agricultural inputs to make the season successful
• Plans to meet food needs locally by 2025
The multi-sector mechanism to empower rural economic revitalization centres to ensure food security and nutrition was initiated under the patronage of President Ranil Wickremesinghe today (13).
The vision of the Food Security Programme of the Government is to ensure every citizen has access to enough food at a reasonable price to lead an active and healthy life, at any given situation of the country.
The government has initiated this program with the view of achieving dual objectives of ensuring that no citizen of the country should starve due to lack of food and no child should be a victim of malnutrition.
In order to achieve these dual objectives, it is required to protect all families in the country from being victims of poverty.
The relevant mechanism has been implemented through seven committees while the National Food Security and Nutrition Council will function under the chairmanship of the President.
The National Combined Mechanism on Food Security and Nutrition will function under the Chairmanship of the President’s Secretary whereas the Technical Advisory Committee on Food Security and Nutrition will be chaired by the Prime Minister’s Secretary.
The Provincial Combined Mechanism on Food Security and Nutrition will function under the chairmanship of the Provincial Governors while the District Combined Mechanism on Food Security and Nutrition will be chaired by the District Secretaries. The Combined Regional Mechanism on Food Security and Nutrition is to be implemented under the chairmanship of the Divisional Secretaries.
Rural Economic Revitalization Centers will comprise Grama Niladhari, Development Officer, Agriculture Research and Production Assistant, Samurdhi Niyamaka Niladhari, Midwife, principle of the closest school and two representatives of the local government institution.
This program will function under the leadership of President Ranil Wickremesinghe under the instructions of the President’s Adviser on Food Security Dr. Suren Batagoda,  joined by the entire government machinery, from the Prime Minister and the President’s Secretary to the Grama Niladari  level, the private sector, non-governmental organizations, professionals and religious leaders.
It is planned to produce 3.6 million metric tons of the total rice requirement of the country, 50% of the annual onion requirement and 35% of the potato requirement, locally.
It is also planned to produce 20% of the annual soy requirement of 250,000 metric tons in the country by 2025, 20% of the dry chili requirement to be produced locally by 2025, and the entire requirement of cowpeas, green beans, peas, sesame seeds and groundnuts to be produced locally by 2025.
It is planned to produce 80% of the 650,000 metric tons of maize required annually for the development of livestock such as eggs and poultry meat this year. By 2025, Sri Lanka is expected to grow its entire requirement of maize, locally.
Currently, steps have been taken to import 230,000 metric tons of urea, 100,000 metric tons of TSP and 182,000 metric tons of MOP required for the production of wheat and maize in the Maha season under the World Bank, Asian Development Bank and Indian credit line and to import fertilizer required for the production of other food crops with the contribution of the private sector.
Facilities are to be provided to buy agrochemicals and organic fertilizer from the market without shortage and it is planned to provide a 50 kg bundle of urea at a fair price lower than the current market price.
The government has already started the mechanism to supply the chemical fertilizer, organic fertilizer, agrochemicals and seeds to the farmers through the market at the right time to make the 2022 season a success.
It is planned to bring the products of the agriculture and livestock sector to the production level of the year 2018 and the necessary agricultural inputs including seeds, chemicals, chemical fertilizer, animal feed and fuel will be provided in sufficient quantity.
To achieve these production targets modern advanced irrigation systems and technology are planned to be used.
It is also planned to achieve the agriculture and livestock sector production to the levels experienced in 2018 and sufficient amounts of agricultural inputs such as seeds, chemicals, chemical fertilizer, animal feed and fuel will be provided to reach this goal.
Modern advanced irrigation systems and technologies are expected to be used to achieve the production targets. The government’s concept of fertilization is planned to be popularized in plantations, thereby increasing production productivity.
Prime Minister Dinesh Gunawardena, Minister of Agriculture, Wildlife and Forest Conservation Mahinda Amaraweera, President’s Secretary Saman Ekanayake, Presidential Adviser on National Food Security Dr. Suren Batagoda and government officials including Governors, Ministry Secretaries, District Secretaries, Provincial Chief Secretaries, Bank and Corporation Chairmen were present at the inauguration.
President Media Division (PMD)