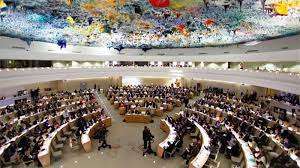 -US calls for accountability for protest-related violence

-EU condemns unwarranted use of force against peaceful demonstrators

The United States, the European Union and the United Kingdom called on the Sri Lanka government to reform the controversial Prevention of Terrorism Act (PTA) in order to align with international human rights obligations and commitments.

Speaking at the 51st Session of the Human Rights Council in Geneva Ambassador Michèle Taylor on behalf of the delegation of the US said “The rule of law, equal access to justice, independent institutions, transparency, and accountability are pillars of democratic systems,” she said.

“We urge respect for human rights and fundamental freedoms, including rights to peaceful assembly and expression. We call for accountability for protest-related violence in line with rule of law and equal access to justice,” she said.

“It is essential that the Prevention of Terrorism Act align with international human rights obligations and commitments, to protect fair trial guarantees and other applicable legal protections.

“As a key step toward improved human rights, it is also important to address longstanding impunity and corruption in Sri Lanka. We will continue to support justice, accountability, and reconciliation in Sri Lanka,” the US delegation said.

The delegation also asked the Office of the High Commissioner for Human Rights how best they can support Sri Lanka’s political reform efforts and ensure they are representative, inclusive, and responsive to the needs of all, including members of minority groups.

Meanwhile, the UK delegation at the Council said “We are dismayed that in response, violence was used against protesters. We are deeply concerned about the arrest and ongoing detention of protestors under the Prevention of Terrorism Act and continue to call for reform of the Act,” the UK delegation in Geneva said.

“We regret the limited progress made on accountability and justice as requested in HRC resolution 46/1. The domestic reconciliation and accountability process promised in 2020 has not emerged. For these reasons, OHCHR’s work collecting and preserving evidence must continue,” the UK delegation said.

The UK welcomed Sri Lanka’s recent commitments on respect for the rights of those from all religious and ethnic groups, including through political inclusion and constitutional reform.

The UK said it will stand ready to continue dialogue and support Sri Lanka with this and with the promised approaches to accountability, justice and reconciliation.

Speaking at the session, the EU condemns the unwarranted use of force against peaceful demonstrators and calls upon Sri Lanka to suspend the Prevention of Terrorism Act until it is in full compliance with international human rights law and standards and calls for accountability and immediate acts to end impunity.

“The EU thanks the Office of the High Commissioner for the report, which we welcome. We reaffirm our commitment to Human Rights, reconciliation and accountability in Sri Lanka.”

“The EU recognizes the challenges Sri Lanka is facing following months of protest and the recent change of government, while underlining the need of upholding all human rights and fundamental freedoms, especially freedom of opinion and expression of all persons in Sri Lanka, including persons and groups in vulnerable and marginalized situations. We also underline the need for effective and equal fulfilment of economic, social and cultural rights of all.

The EU encourages the government of Sri Lanka to remain engaged with the UN and international partners as well as fully cooperate with the High Commissioner. The EU will continue to support Sri Lanka’s efforts towards a fully inclusive dialogue on governance, rule of law, democratic values, and devolution and human rights.”