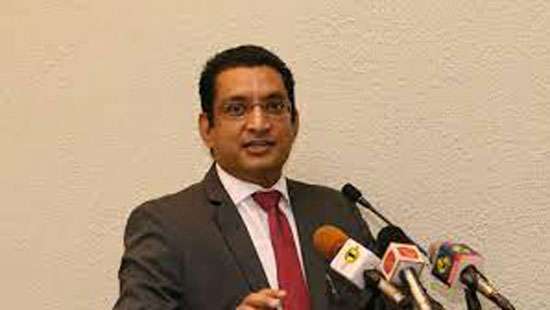 Foreign Minister Ali Sabry, in his address to the UNHRC, said Sri Lanka would reject any follow up action to the resolution 46/1.

In his statement, the Minister said Sri Lanka along with several Members of this Council had opposed resolution 46/1, fundamentally disagreeing with its legitimacy and objectives.

“We have consistently highlighted that the content of the resolution, its operative paragraph 06 in particular, violates the sovereignty of the people of Sri Lanka and the principles of the UN Charter. Once again, we are compelled to categorically reject any follow-up measures to the resolution, as well as the related recommendations and conclusions by the High Commissioner,” he said.

“In keeping with our commitment, notwithstanding our categorical rejection of resolution 46/1, we have submitted Sri Lanka’s detailed written response to the High Commissioner’s Report. We have requested that Sri Lanka’s comments be placed as an Addendum to the Report, to accord with best practices.

We remain cognizant of and acutely sensitive to the events that have taken place in the recent past. The severe economic crisis emanating from factors both internal and external offer many lessons for all of us. We recall in this context the indivisibility of human rights, as enshrined in the Vienna Declaration and Programme of Action. The Government is extremely sensitive to the socio-economic hardships faced by our people, and has initiated immediate multi-pronged measures to address the challenges and to ensure their wellbeing through the provision of supplies essential to the life of the community. A staff level agreement has been reached with the International Monetary Fund, and discussions on debt restructuring are in progress. The Government is in dialogue with UN agencies as well as bilateral partners to protect the most vulnerable from the adverse impacts of the crisis. In spite of multiple challenges, Sri Lanka would endeavour to remain on course in meeting the goals of the 2030 Agenda for Sustainable Development.

The recent changes that have taken place bear testimony to our continued commitment to upholding our longstanding democratic principles and norms. The constitutional rights to peaceful assembly and expression guaranteed the democratic space for our people to exercise their rights. In this regard, transgressions of the law resulting in criminal and unlawful activity were addressed in accord with the law and the Constitution, in circumstances where such freedoms were abused by elements with vested interests to achieve undemocratic political ends.

Notwithstanding the severe constraints and challenges, Sri Lanka remains firmly committed to pursuing tangible progress in the protection of human rights and reconcilation through independent domestic institutions.

Sri Lanka along with several Members of this Council have opposed resolution 46/1, fundamentally disagreeing with its legitimacy and objectives. We have consistently highlighted that the content of the resolution, its operative paragraph 06 in particular, violates the sovereignty of the people of Sri Lanka and the principles of the UN Charter. Once again, we are compelled to categorically reject any follow-up measures to the resolution, as well as the related recommendations and conclusions by the High Commissioner.

Notwithstanding, Sri Lanka has continued to brief the Council on the comprehensive legal framework that is being established to further strengthen governance and combat corruption. The proposed 22nd Amendment to the Constitution introduces several salient changes which would strengthen democratic governance and independent oversight of key institutions, as well as public scrutiny, participation in governance, and combatting corruption including the constitutional recognition of the United Nations Convention Against Corruption (UNCAC). This will include, inter alia, the composition of the Constitutional Council, and the reintroduction of the National Procurement Commission and the Audit Service Commission. The proposed legal framework will also strengthen the asset declaration system, protect the rights of whistle blowers, and increase the independence of the Commission to Investigate Allegations of Bribery or Corruption. A proposal to establish a system similar to an Inspector General tasked with overseeing government expenses by detecting and preventing fraud, waste and abuse in public institutions, is under consideration.

The recommendations of the Presidential Commission of Inquiry on “Appraisal of the Findings of Previous Commissions and Committees and the Way Forward” have, inter alia, resulted in the establishment of an Advisory Board under the Prevention of Terrorism Act (PTA), progressive amendments to the PTA, and the release of detainees,” he said.