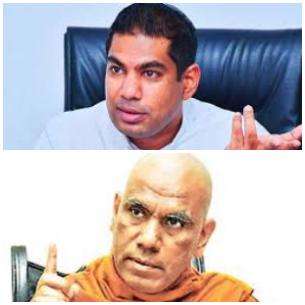 Power and Energy minister Kanchana Wijesekera said that if the temples do not pay their electricity bills, it will result in disconnection.

While responding to the statement made by the former parliamentarian and Leader of the Jathika Hela Urumaya, Ven. Omalpe Sobhitha Thera, the minister said that if the prelate falls into the same category as being a politician, the non payment of Electricity bills will be treated as default and result in disconnection.

While expressing disagreement, Ven. Sobhitha said he was unable to pay the electricity bill which he had received after the recent tarrif revision.

Addressing the media he said the electricity bill which was at Rs.58,000, has been increased to Rs.300,000 for this month.

We utilise this power for the benifit of the people in the area till 10.00 pm only.

We cannot bear the revised electricity bill and we cannot pay and we are not going pay this bill,” the prelate said.

“The Ceylon Electricity Board (CEB) is trying to cover its lossess from us and from the innocent people. The politicians have robbed the country’s valuable assets and billions of money and as a result of their malicious deeds, the CEB incurred a colossal loss.

Why should we pay money for redeem them?,” the Ven. Sobhita questioned. (Chaturanga Samarawickrama)