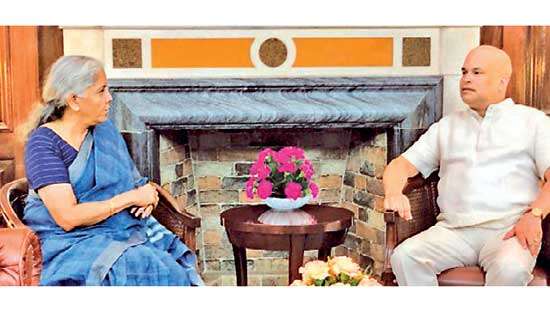 Sri Lankan High Commissioner to India Milinda Moragoda expressed gratitude to neighbouring giant India for its support in helping the crisis nation reach out to the International Monetary Fund (IMF) and said the firming up of the first step with the agency has given the much-needed confidence to lure investments.

Moragoda shared that with the IMF agreement taking shape, Sri Lanka now expects more countries to offer assistance. He highlighted that India was the ‘only partner’ to have stepped up even without a framework in place.
“The key fact here is that having the staff-level agreement gives us confidence. The money is not huge but it gives us confidence — one for investors to come in, maybe for our remittances, which have dropped by half to increase and also for other bilaterals like Japan to come,” said Moragoda while speaking at The Indian Express Idea Exchange on Thursday.

“We are grateful to India, which encouraged us to go to the IMF. Finance Minister (Nirmala) Sitharaman and External Affairs Minister S. Jaishankar played a role in that. India was the only country, the only partner, which stepped up without us having any kind of programme,” he added.

This week, the Sri Lankan authorities and IMF team reached a staff-level agreement to support the authorities’ economic adjustment and reform policies with a new 48-month Extended Fund Facility (EFF), with a requested access of US $ 2.9 billion.

Earlier this year, Sri Lanka, battling the worst economic crisis in its history, had plunged into unprecedented turmoil, with an acute shortage of essentials such as fuel and medicine triggering massive protests, which forced Gotabaya Rajapaksa to flee the country and resign as the President, a post taken over by Ranil Wickremesinghe. Following the IMF package, Moragada identified power, oil and tourism as some of the areas where structural reforms, through cooperation with India, can help restore macroeconomic stability. India, he said, can explore developing the port city of Trincomalee as an energy hub.