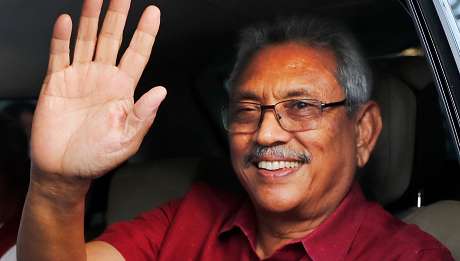 Former President Gotabaya Rajapaksa returned to Sri Lanka a short while ago on board a Singapore Airlines flight after fleeing the country in July, the Daily Mirror learns.

Rajapaksa arrived at the Bandaranaike International Airport a short while ago amidst a heavy security presence.
Rajapaksa will be living in a state bungalow close to Wijerama Mawatha in Colombo while a large security contingency will be appointed to maintain security in the area.

Several ministers arrived at the BIA to welcome the former President.

Rajapaksa resigned from the Presidency in July amidst mass scale protests calling for his resignation as Sri Lanka was plunged into one of its worst ever economic crisis.

He fled to the Maldives on board an airforce aircraft and then entered Singapore on a medical visa, which was extended twice.

As the Singapore government failed to extend it the third time, Rajapaksa along with his wife left for Thailand where he was advised to remain inside his hotel for security reasons.

With his movements restricted, Rajapaksa decided to return back to Sri Lanka and will remain here till his application for the USA Green Card is approved by the American government.

Rajapaksa will be accorded all privieliedges as a former president and will be allocated additional security. He will reside at the state allocated bungalow. (JAMILA HUSAIN)