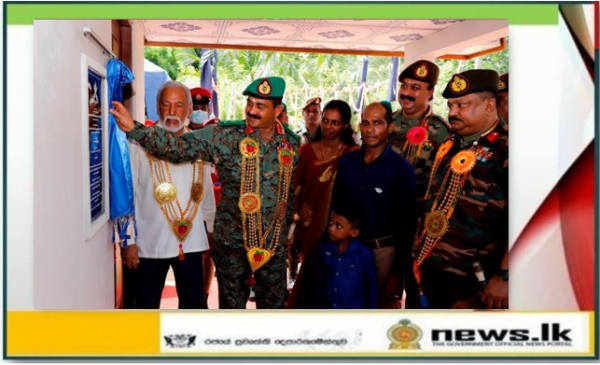 The inaugural warming of the Army-erected new house with funds, released to the Army by the peninsula-based donor, Mr Vish Nataraja took place Friday (26) noon during a brief ceremony of Hindu rites and rituals where the Army Chief at the invitation of the Commander, SF-J graced the brief ceremony as the Chief Guest to hand over keys to the recipients. Troops of the 16 Sri Lanka Light Infantry of the 551 Brigade under the 55 Division volunteered, offering technical, engineering and manpower assistance for the construction of it within a short span of time.

The beneficiaries, both husband and wife who worked for the LTTE terrorist organization as combatants before 2009 sustained serious injuries, surrendered and were rehabilitated after recovery. Presently, the husband has been working as a labourer on a concrete manufacturing site. The SFHQ-J on being informed of their plight initiated the construction of this house and succeeded in receiving the sponsorship for its erection.

The Commander of the Army afterwards gave a cash donation to the three-member family and wished them good luck with their future endeavours. At the same location, the Army Chief on humanitarian grounds gave away a monthly scholarship of Rs 5000/= to three deserving students who did very well in the recent scholarship examination. The scholarship lasts until they reach the A/L examination and the sponsorship has been provided by Dr Piyasena Gamage, an expatriate in Australia through the Army.

In addition, school accessories for students and packs of dry rations for pregnant mothers were awarded at the same location with the Army sponsorship. The Army Chief was joined by the Commander, SF-J for distribution.