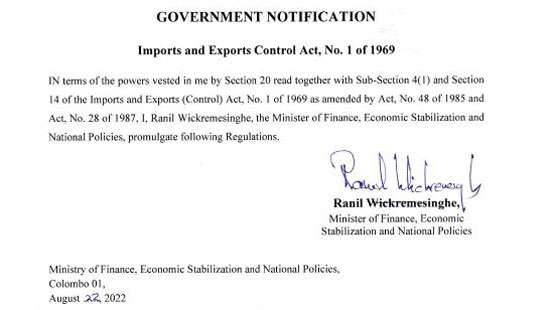 The Govt. yesterday issued new regulations via an extraordinary gazette suspending the import of a plethora of items, with effect from August 23, 2022, until further notice.

 Goods shipped on or before Aug. 23 and arrive in SL before Sept. 14 will be allowed Customs clearance

 Not applicable to BOI firms; re-exporters and other entities need approval from Finance Ministry and Industries Ministry

President Ranil Wickremesinghe, in his capacity as the Finance, Economic Stabilisation and National Policies Minister, yesterday issued new regulations via an extraordinary gazette suspending the import of a plethora of items, with effect from August 23, 2022, until further notice.

However, the gazette notification stated that any goods shipped on board with the date of bill of lading/airway bill on or before August 23, 2022 and arrived at any sea port or airport in Sri Lanka on or before September 14, 2022, would be allowed for Customs clearance.

While there were gazette notifications issued previously suspending imports, the latest one slaps the ban on a wide range of goods, as the dollar-hungry nation struggles to stay afloat until a deal is struck with the International Monetary Fund (IMF) for a bailout package.

The import ban is slapped on a wide range of consumer goods from chocolates to spectacles, to suitcases, to pressure cookers, to toasters, to wristwatches, to dishwashers, to telephones, to air conditioners, to cosmetics, to perfumes, to musical instruments, to clothing items including underpants, to alcoholic and nonalcoholic beverages and a number of products that fall under the investment goods imports.

However, the gazette notification said the import suspension would not be applied to Board of Investment (BOI) companies engaged in processing and re-export and enterprises/ operators approved under the Temporary Importation for Export Purposes (TIEP) scheme of the Sri Lanka Customs.

The other businesses involved in processing and re-export could import suspended goods, with the approval of the Controller General of Imports and Exports Control on recommendation of the Industries Ministry Secretary or Export Development Board Director General, on a case-by-case basis.

Any other request for importation of any goods specified in the gazette by any other party could be entertained by the Controller General of Imports and Exports Control, subject to the approval of the Finance Minister, on the recommendation of the Treasury Secretary “for the purpose of direct usage, not for trading purposes, of such enterprises, case-by-case basis,” the gazette notification said.

It also said the Controller General of Imports and Exports would issue operational instructions to the Director General of Customs and licensed banks for effective implementation of these regulations.