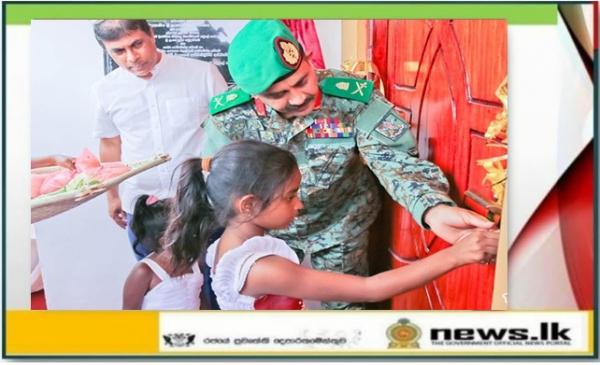 After warming the first house at Kebithigollawa, as the second project of the day, the Army Chief proceeded to warm one more new house, built by Army troops for one more needy widowed family living in Dematamalgama, Thanthirimale. This house was put up by 5 Sri Lanka National Guard (SLNG) troops under the supervision of the Colonel of the Regiment, SLNG and the Commanding Officer of the 5 SLNG. The same philanthropist, Mr Ajantha Vass Gunasekara has spent Rs 1.1 m towards the construction of this new house too through the coordination of Brigadier Anil Peiris.

Lieutenant General Vikum Liyanage, Commander of the Army who is also the Colonel of the Regiment Sri Lanka National Guard (SLNG) as the Chief Guest, together with Mrs Janaki Liyanage, President, Army Seva Vanitha Unit (ASVU), Wanni Commander and Brigadier Anil Peiris inaugurated that new house at the auspicious minute in accordance with traditions amid religious rites and rituals. Unveiling of a plaque and other associated traditions followed the house-warming as the key to the new house was delivered to the beneficiary at the location by the Chief Guest.

The widow in the civilian family, Mrs. D Dineshika Siripala at Dematamalgama, Thanthirimale symbolically received the key. Mrs Janaki Liyanage meanwhile gifted a pack of household essentials to the beneficiary.

General Officer Commanding, 21 Division and Commanding Officer of the 5 SLNG warmly welcomed Lieutenant General Vikum Liyanage to the location on arrival and the day’s Chief Guest amidst ‘Seth Pirith’ chanted by members of the Maha Sangha handed over the key of the Army-erected new home to the beneficiary.