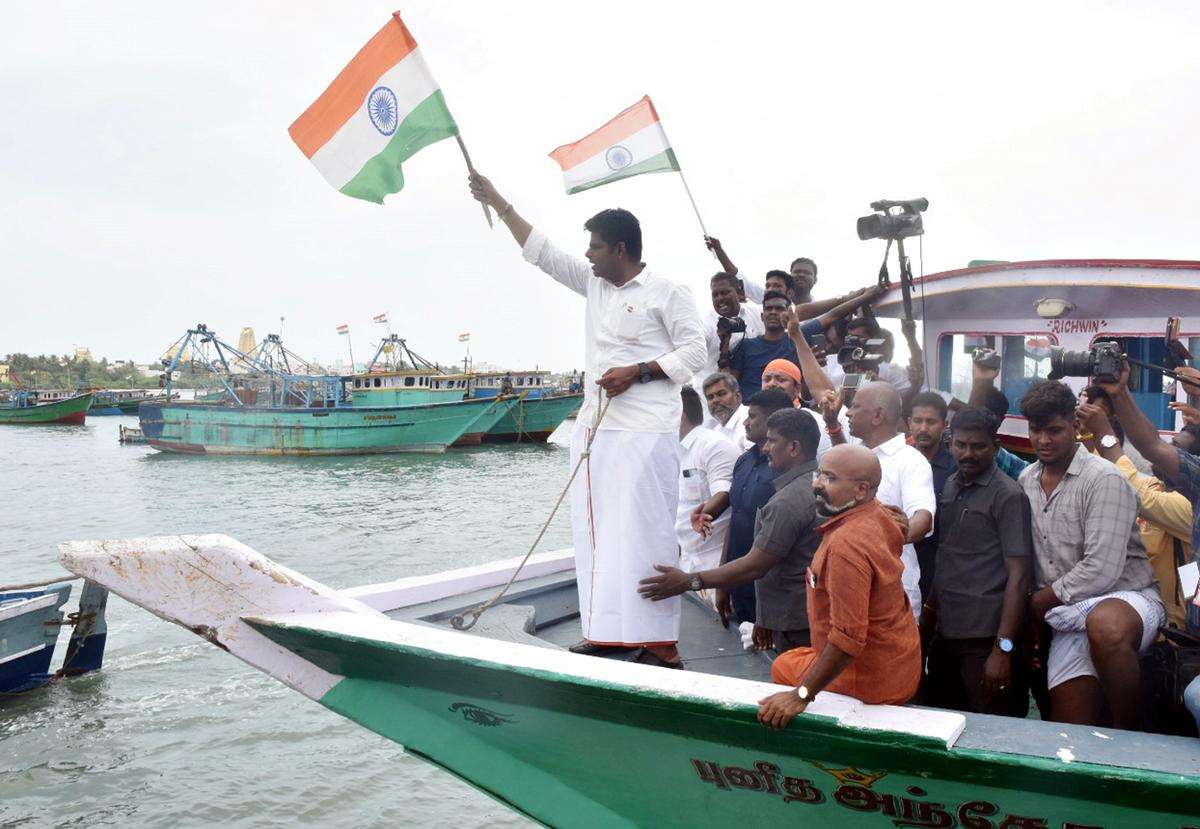 The Tamil Nadu Bharatiya Janata Party will continue to pressurise the Union government to retrieve the Katchatheevu island from Sri Lanka as it would facilitate the fishermen in Tamil Nadu to engage in fishing activities along the Palk Straits without any insecurity and threat from the Sri Lankan Navy personnel, said its state president K Annamalai in Rameshwaram on Sunday.

The BJP Ramanathapuram district functionaries organised a series of events on the visit of their state leader. With a host of fishermen, the BJP functionaries led by Mr Annamalai took a boat ride waving the Indian Tricolour flag in Rameswaram. He visited the memorial of APJ Abdul Kalam and paid tributes at Peikarumbu and went to Kundukal fish landing jetty.

Speaking to reporters, he said that though the Katchatheevu was handed over to Sri Lanka by the then Prime Minister Indira Gandhi in 1972 and it had been described as a “settled matter,” steps are being taken now to retrieve it. The government led by Narendra Modi is keen to protect the welfare of the fishermen. So, the BJP unit from TN would keep pressurising the Centre on this issue.

The Katchatheevu, according to the fishermen here, would be more useful and productive for the fishermen from TN than those from Sri Lanka. While the fishermen can get catch only in Katchatheevu islet, it would be logically perfect to be demarcated with in the Indian waters, he explained.

After 2014, when Mr Modi assumed office, the number of incidents of arrests of fishermen by the Sri Lankan Navy had reduced phenomenally. Even in the case of any arrests, the Union government intervened and brought them back safely. Thus, retrieving Katchatheevu would be the only option for a peaceful fishing, which would be taken up by the BJP, he underlined.

When reporters asked his comment on the Madurai airport incident on Saturday in which a few BJP cadres had allegedly hurled chappal at the Finance Minister Palanivel Thiaga Rajan’s car and the late night development in which the Madurai BJP district president Saravanan had announced to quit the party, Mr Annamalai said that quitting or joining a party is the prerogative of a person. The incident was condemnable as the BJP cadre should not have indulged in such an act. At the same time, Mr Thiaga Rajan should not have degraded his position by picking up a quarrel with the BJP men. Anyway, the police are investigating into the issue.

The BJP has a long tradition of giving respect to every individual irrespective of the caste, creed and community. The party would not tolerate indiscipline in any manner. In the Madurai incident, the BJP party had organised to pay homage to martyr D Lakshmanan. It was a solemn ceremony and such an act had lowered the dignity and hoped it would not recur anywhere in future, he added.