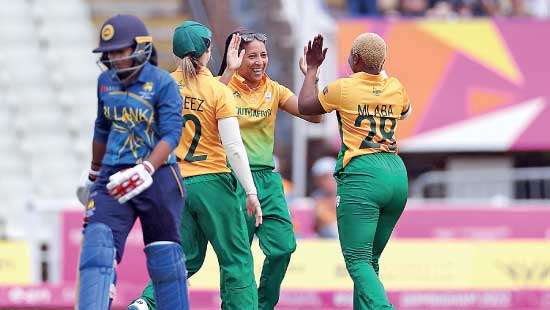 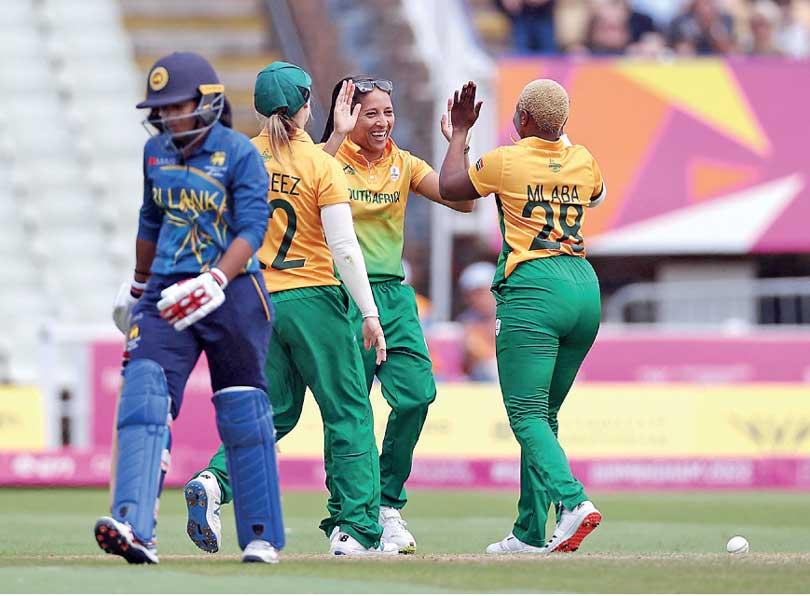 By Susil Premalal reporting from Birmingham

The Sri Lanka Women’s Cricket Team finished at the bottom of the points table after they crashed to a third straight defeat at the hands of South Africa Women in their Commonwealth Games Twenty20 Cricket Tournament Group ‘B’ fixture played in Birmingham, England yesterday.

Sri Lanka were bowled out for their lowest total (46) in T20Is with only one batter, Chamari Atapattu, getting into double figures. In addition, they had four ducks on the scorecard and had only one partnership for over 10 runs.
Overall, they had the lowest aggregate score across the group stage of all teams in the tournament, including Barbados, who did not cross 100 in two innings.

Sri Lanka scored 106 for nine against England, 102 for eight against New Zealand and 46 in this match to total 254. Barbados scored 270 in the tournament.

With not many runs to chase, South Africa eased their way to victory in 6.1 overs, their first win since beating Ireland on June 17 and finished third in the points table.

Meanwhile, medal prospect Kalinga Kumarage will compete in the Men’s 400m semi-finals today (5) after finishing the first-round heat with a time of 46.53s.

Among the other athletes who will be in action today are Sarangi de Silva (Women’s long jump qualifying round) and Nilani Rathnayake (Women’s 3,000m steeplechase final).

In addition, Sumedha Ratnayake will compete in the Men’s javelin throw event on August 8.

Elsewhere, Sri Lankan shuttler Niluka Karunarathna defeated Michael Martin of Barbados 21-6, 21-5 in the Men’s Singles round of 32 encounter of the Badminton Tournament.

The Sri Lankan pair of Shamil Wakeel and Ravindu Laksiri had the better of Wiltshire Shomari and Khalil Jason of Guyana 11-5, 11-6 in the Men’s Doubles Squash Tournament.