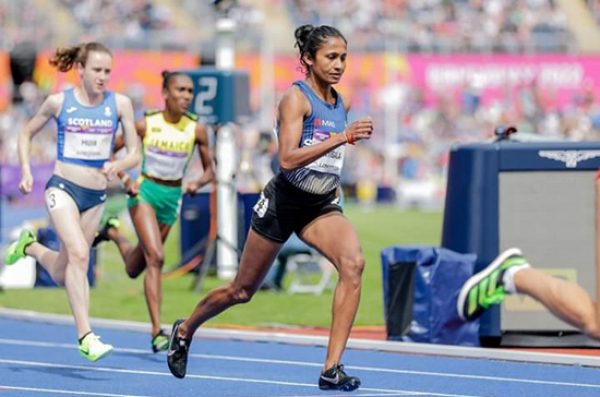 The ace Navy athlete shattered the previous national record (02 minutes and 01.44 seconds) set by herself at the Centenary National Athletics Championship – 2022. Accordingly, she locked a time of 02 minutes and 01.20 seconds setting the new Sri Lanka record in Women’s 800m heat at the Commonwealth Games 2022 on 02nd August.

Women Petty Officer Gayanthika Abeyrathne, who has won many national and international sports titles, set new Sri Lanka records in 1500m and 5000m at the National Athletics Championship in 2021, bringing a lot of credit to the Navy. In recognition of her sporting talents, Commander of the Navy, Vice Admiral Nishantha Ulugetenne promoted the athlete from the rate of Leading Women Sailor to Women Petty Officer on 02nd November 2021.

Fittingly, she has also won the trophy for Best Athlete (Women) at the Navy Colour Awarding Ceremony held in 2021.