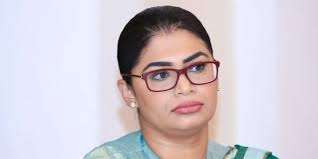 The Colombo Fort magistrate refused to make Hirunika Premachandra and 10 others suspects for protesting outside the presidents house on July 6.

The 10 including Hirunika were noticed to appear before the court today by the Fort Pice station .

Premachandra and others were the first to protest outside the presidents house calling for the resignation of Gotabaya Rajapaksa.

Counsel making submissions on behalf of the persons said that there is no provision in law for facts to be reported in the manner it has .

They further said that the law doesn’t allow for the police to file action as and when the political situation changes .

They said the police request for court to name the persons suspects was illegal .

As a result the magistrate refused to name the person as suspects and made no order was made .