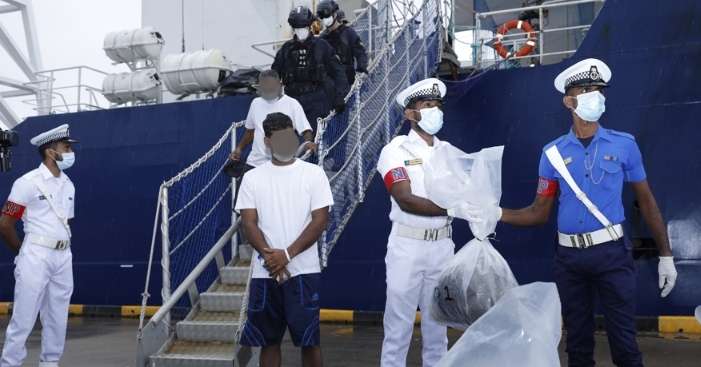 A total of 46 Sri Lankans repatriated from Australia were brought back to Sri Lanka onboard an Australian Border Force (ABF) vessel for the first time and disembarked at the Port of Colombo on Friday.

These illegal migrants were taken into custody by the ABF while attempting to enter Australia illegally via sea by boats.

They disembarked from the Australian ABF patrol vessel 'Ocean Shield' and were handed over to the Sri Lankan authorities in keeping with the healthcare procedures to contain the spread of COVID 19 followed by preliminary health checkups.

Recalling the long-standing close cooperation between the two countries, the ABF Regional Director for South Asia, Commander Chris Waters said they have repatriated 183 individuals from Australia following six unsuccessful illegal maritime crossings since May this year.

“No policy changes in Australian side in relation to unauthorized maritime human smuggling with the change of Government”, he stressed.

Commander Western Naval Area of the Sri Lankan Navy (SLN), Rear Admiral Dhammika Kumara highlighting the consequences of the futile illegal migration attempts due to maritime patrols of SLN, Sri Lanka Coastguard and ABF stressed “Not to fall prey into the hand of such illegal racketeers”.

It is the first occasion that repatriation was conducted by an Australian ABF ship. The ABF vessel ‘Ocean Shield’ is one of Australia’s offshore vessels that conduct far-reaching patrols and responds to illegal activities including human smuggling.

High Commissioner Designate of Australia to Sri Lanka, Paul Stephens, officials of the Australian High Commission, SLN and ABF were present at the occasion.

The ABF officials handed over the repatriated group of illegal immigrants to the Immigration and Emigration Department officials at Colombo Port, through the Sri Lanka Navy.