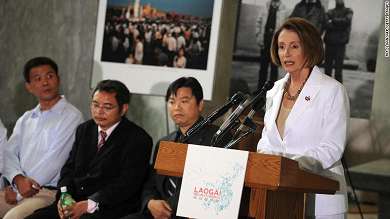 US House Speaker Nancy Pelosi landed in Taipei on Tuesday, marking a significant show of support for Taiwan despite China's threats of retaliation over the visit.

Pelosi's stop in Taipei is the first time that a US House speaker has visited Taiwan in 25 years. Her trip comes at a low point in US-China relations and despite warnings from the Biden administration against a stop in Taiwan.

Pelosi and the congressional delegation that accompanied her said in a statement on Tuesday that the visit “honors America's unwavering commitment to supporting Taiwan's vibrant democracy.”

“Our discussions with Taiwan leadership will focus on reaffirming our support for our partner and on promoting our shared interests, including advancing a free and open Indo-Pacific region,” the statement said. “America's solidarity with the 23 million people of Taiwan is more important today than ever, as the world faces a choice between autocracy and democracy.”

Pelosi is expected to depart Taiwan later on Wednesday, according to a news release issued by the foreign ministry. The official was not authorized to speak about Pelosi's travel plans that have not been publicized.

The American Institute in Taiwan said Pelosi's delegation will meet with senior Taiwanese leaders “to discuss US-Taiwan relations, peace and security, economic growth and trade, the Covid-19 pandemic, the climate crisis, human rights, democratic governance, and other significant issues of mutual interest,” the institute said in a statement.

Pelosi wrote an op-ed that published in The Washington Post after she landed Tuesday, arguing that her trip demonstrated the US commitment to Taiwan under threat from China. “In the face of the Chinese Communist Party's accelerating aggression, our congressional delegation's visit should be seen as an unequivocal statement that America stands with Taiwan, our democratic partner, as it defends itself and its freedom,” the California Democrat wrote.

Pelosi's stop in Taiwan was not listed on the itinerary of her congressional visit to Asia, but the stop had been discussed for weeks in the lead up to her trip. The potential stop prompted warnings from China as well as the Biden administration, which has briefed the speaker about the risks of visiting the democratic, self-governing island, which China claims as part of its territory.

China's Ministry of Foreign Affairs released a statement after Pelosi landed, charging that her visit “has a severe impact on the political foundation of China-U.S. relations, and seriously infringes upon China's sovereignty and territorial integrity.”

“It gravely undermines peace and stability across the Taiwan Strait, and sends a seriously wrong signal to the separatist forces for 'Taiwan independence,'” the foreign ministry said. “China firmly opposes and sternly condemns this, and has made serious démarche and strong protest to the United States.”

The statement followed a Monday warning from China against the “egregious political impact” of Pelosi's visit, saying that the Chinese military “won't sit by idly” if Beijing believes its “sovereignty and territorial integrity” is being threatened.

The White House said Tuesday that Pelosi's trip was consistent with US policy on Taiwan, and that the US would be watching China's actions closely after Pelosi leaves.

“Obviously, we're going to be watching this closely. There is no reason for this visit to become a spurring event for a crisis or a conflict or for a pretext that the Chinese might try to whip up for some sort of military action,” National Security Council coordinator for strategic communications John Kirby said on CNN's “At this Hour with Kate Bolduan” on Tuesday.(CNN)