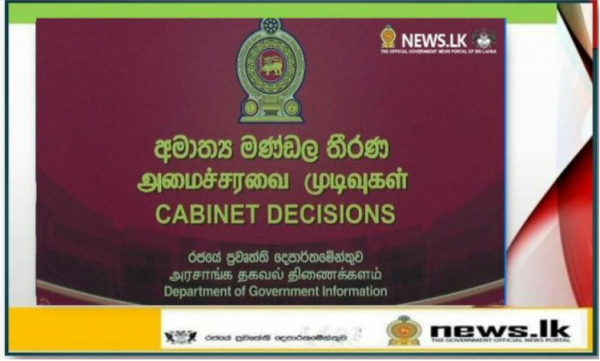 Approval of the Cabinet of Ministers has been granted at their meeting held on 13.06.2022 not to
open government offices during Fridays as a remedy since it has become difficult for the state sector
employees to find transport facilities due to the existing fuel shortage as well as a remedy to the food
scarcity to be experienced in the future. Accordingly, the Public Administration circular No. 15/2022
dated 15.06.2022 has been issued inclusive of the said instructions with a validity / effective period of
03 months. However, the Cabinet of Ministers approved the resolution forwarded by the Hon. Prime
Minister as the Minister of Public Administration, Home Affairs, Provincial Councils and Local
Government to cancel the above circular with immediate effect, considering the that the public
transport is being normalized by now as well as a sufficient period has been allocated to be engaged
in the preliminary activities applicable to the agricultural activities.

The monitoring efficiency as well as the financial discipline of the state enterprises have to be
ensured strictly with a view to enable confronting the challenging situation existing within the
country at present. Accordingly, the Cabinet of Ministers has granted their concurrence to the
proposal submitted by the President as the Minister of Finance, Economic Stability and National
Policies in order to issue circular instructions for the expenditure management and ensuring the
sustainability of enterprises of the state corporations, statutory boards and government owned
companies, parallel to the National Budget Circular No. 03/2022 dated 26.04.2022 issued in regard to
the control of government expenditure.

Garment industry has become one of the main sectors earning foreign exchange to Sri Lanka even
amidst Covid – 19 pandemic circumstances. However, due to the price hike of raw materials and the
prevailing unfavourable economic environment experienced in the country, local garment
manufacturers are compelled to deal with a number of challenges when importing appliances required
for garment manufacturing that are not produced locally. Accordingly, the Cabinet of Ministers
granted approval to the resolution furnished by the Minister of Industries for granting duty
concessions in regard to appliances / items not manufactured locally and coming under 19
harmonized system (HS) codes; as a remedy to the prevailing situation.

4. Incentives to Migrant workers for remittances through official channels

Increasing the remittances made by migrant workers to Sri Lanka is a solution to the foreign
exchange crisis in the country. Therefore, an officers committee has been appointed as per the
decision of the Cabinet of Ministers dated 27.06.2022 to study the facts and make recommendations
regarding the relief and incentives to be given to them.

Cabinet of Ministers approved the proposal presented in accordance with the recommendations of the
committee, by the Minister of Labour and Foreign Employment to provide an Additional Duty
Concession Allowance for them based on the amount remitted to Sri Lanka through official channels
upon the arrival of the concerned migrant workers to Sri Lanka and to facilitate the said migrant
workers to purchase an electric vehicle.

5. Enactment of the Constitution of the – Sri Lanka UNESCO National Commission

The need to recognize and strengthen in Sri Lanka UNESCO National Commission has long been
recognized. In accordance with the cabinet decision dated 14.06.2021, Legal Draftsman has prepared
a bill for this purpose and the clearance of the Attorney General has also been received for this.
Accordingly the Cabinet of Ministers approved the proposal presented by the Minister of Education
to publish this in the Govt. Gazette and consequently table in the parliament for approval.

Approval of the Cabinet of Minister has been granted on 2021.10.26 to draft a bill for repealing
section II of the Kandyan Marriages and Divorce Act that requires parental consent for the marriage
of a minor and to remove the existing non-conformities.

Legal Draftsman has prepared a bill for this purpose and the clearance of the Attorney General has
also been received for this. Accordingly the Cabinet of Ministers approved the proposal presented by
the Minister of Justice, Prison Affairs and Constitutional Reforms to publish this in the Govt. Gazette
and consequently table in the parliament for approval.