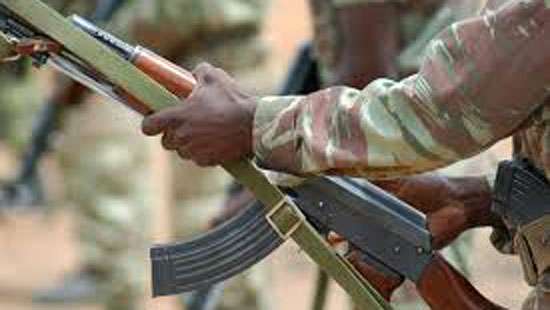 A T-56 firearm and two magazines containing 60 rounds of live ammunition, which were in the possession of a soldier during unrest near Parliament last night, were stolen by the protesters, police said.

A tense flared up last evening at Polduwa Junction near Parliament between protesters and security forces when the protesters tried to advance towards Speaker's house and Parliament.

They said the army soldier attached to a camp in Wellawaya was also injured during the attack by the protestors and he is currently undergoing treatment in the hospital.

A complaint has been lodged to the Borella Police Station about the stolen firearm and ammunition. Welikada and Borella police stations are conducting investigations.

Police said a policeman was also injured while trying to control protesters.

The policeman who was seriously injured in the attack was from the Kalutara Police Training College and is currently receiving treatment in the hospital.