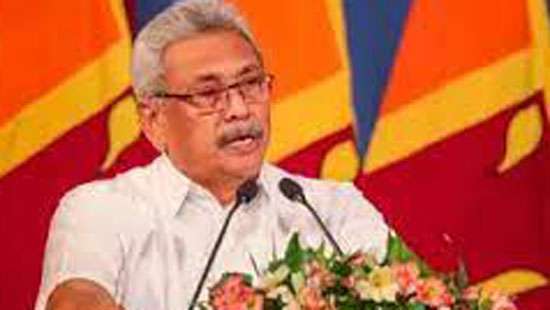 President Gotabaya Rajapaksa yesterday signed his resignation letter, dated for July 13 and the Speaker of Parliament will publicly announce it to the nation tomorrow, the Daily Mirror learns.

The resignation letter of the President was signed and handed over to a senior government official who will hand it over to the Parliament Speaker.

Speaker Mahinda Yapa Abeywardena who has been informed of the letter will then make a public announcement tomorrow ending Gotabaya Rajapaksa's presidency.

Speculation was rife yesterday that Rajapaksa had already left the island last afternoon, however, these reports were rejected by senior sources close to the President who confirmed to Daily Mirror that Rajapaksa was still in the country and was protected by the Armed Forces.

Just before the July 9 riots, President Rajapaksa was evacuated from the President's House in Fort by the security forces and was protected on a naval vessel within the territorial waters of the country for security reasons.

However, sources close to him said that Rajapaksa physically met commanders of the tri forces yesterday morning at 9.30 am and thereafter remains in the country. His exact whereabouts in the country is unknown but he is likely to leave the country this week, paving way for a new President to be sworn in and an All Party government to be formed.

On Wedneday Prime Minister Ranil Wickremesinghe will for a temporary period be sworn in as the President till a new President is selected by Parliament on July 20. Speaker Mahinda Yapa Abeywardena in a statement said party leaders had decided to elect a new President on July 20 through a vote in Parliament in accordance with the provisions of the Constitution.

Nominations for the presidency will be called for on July 19.

So far the two confirmed candidates are the Prime Minister and Opposition Leader Sajith Premadasa who yesterday already informed that he is ready to rebuild Sri Lanka's economy. (JAMILA HUSAIN)