The Central Bank (CB) yesterday has provided the banking sector with a “broad guidance” to grant concessions for the next six months to borrowers hit by the on-going economic crisis while a similar guidance is expected to be issued to non-banking financial institutions (NBFIs) shortly. 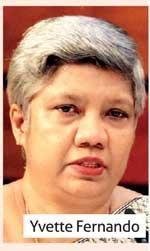 Pin“We have provided a broad guidance as to how to address loan repayments of borrowers who have come under financial strain including those who were under previously granted moratoria, especially in the SME and tourism sectors. The banks have given the discretion to discuss with the borrowers in order to reach an agreement on a suitable repayment arrangement based on the new repayment capacity of each borrower,” CB Deputy Governor Yvette Fernando said. Unlike the blanket moratoria implemented earlier, she highlighted that these concessions are to be considered on a case-by-case basis by banks, which are not limited to one particular sector or sectors.

In addition to the economic crisis, borrowers are also faced with rising finance costs following the significant monetary policy tightening measures of the CB.Commenting on repeated requests from the tourism sector on extending the loan moratorium granted to the sector which expired last month, she pointed out that it would be unfair for others in particular for the SME sector to further extend the moratorium which has been originally granted following the Easter Sunday deadly bomb attacks in 2019.

According to the circular issued by the CB, banks have been encouraged to provide a six-month grace period on loan repayments, which could be on capital or both capital and interest payments of performing loans.

For non-performing loans, banks have been recommended to delay initiating the loan recovery process until the end of the year while rescheduling loan repayments over a longer stretch of time based on the borrowers’ repayment capacity.Banks are also advised to consider implementing these concessions through Covid-19 revival units already been set up.

Amid concerns of food security, the CB requested banks to suspend all recovery action against non-performing credit facilitates of paddy millers until the end of the year after coming up with a mutually agreed mechanism to divert sales proceeds of upcoming harvesting season to recover outstanding credit amounts.The CB has also imposed a maximum rate cap of 15.5 percent or contracted rate of interest (whichever is higher) during this concessionary period (including the recovery period), which is to be charged only on the amount considered for the concession.

In addition, banks have also been advised to not to reject new loan applications from borrowers solely based on adverse CRIB reports due to the on-going economic crisis.Borrowers are required to apply for these concessions on or before 31st of July. If the borrower and the bank fail to reach an agreement, Fernando noted that the borrower has an opportunity to appeal to CB’s Director of Financial Consumer Relation Department.