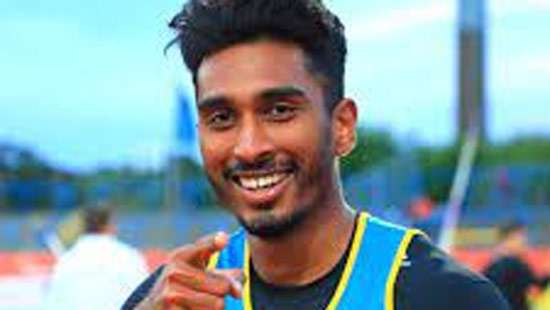 Olympic Sprinter Yupun Abeykoon who set a new men's 100m record in South Asia, with a time of 9.96 secs at the Resisprint International Competition in Switzerland said he was proud to have won this at a time when Sri Lanka was facing a crisis and was receiving negative publicity.

“I have worked hard and am proud that this victory brought some positivity for my country. I know we are facing a difficult situation at this moment and my win is dedicated to all my fellow Sri Lankans,” Yupun told Daily Mirror.
Yupun said soon after his victory he received a telephone call from Sports Minister Roshan Ranasingha and former Sports Minister Namal Rajapaksa.

Minister Ranasingha, while thanking him for his victory, assured his fullest cooperation for his future training.
However Yupun said he appreciated the strong support received by Namal Rajapaksa while he was the Sports Minister stating that the former minister had provided him all the facilities for his training.

He said Namal had also held discussions with the Athletics Association in 2020 to provide all the facilities required for him to continue his training and said he owed his gratitude to the Athletics Association, the former sports minister and the Sports Ministry. “The former sports minister ensured that my training continued unhindered even during the pandemic. I am grateful,” Yupun said.

“This is just the beginning of my long journey to win more medals for my country,” Yupun added.