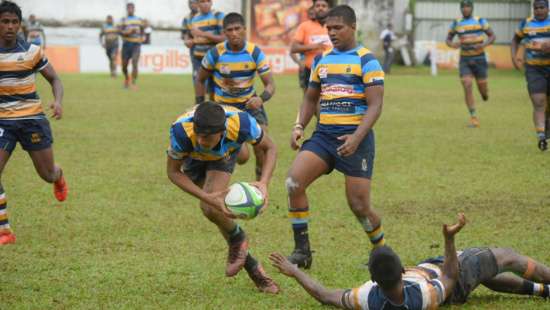 At the short whistle Vidyartha led 5/0.

The game was played under wet conditions, which made ball handling that much more difficult and the boys from Bambalapitiya were guilty of a number of handling errors. Vidyartha too had their share of mistakes, but not to the extent of the visiting team. Whenever the home team got opportunities, they capitalized on same and essentially put the Peterites under pressure.

Kalana Premaratne, the hooker scored the only try (unconverted) for Vidyartha through a forward’s rush very early in the game. In the second half Vidyartha put over a couple of penalties through full back, Menuka Thilakaratne. For the losers their only try was scored by Vishwa Silva with Emith Jayaweera adding the extras late in the game with the clock running down on them. Vidyartha were perched deep in Peterite territory, when referee Gihan Yatawara brought the game to an end signaling a famous Vidyartha win. Vidyartha is coached by Nalin Wijesinghe with Ananda Kasturiarachchi as their Rugby Director.

The last Vidyartha win against St. Peter’s was at Bambalapitiya in 2012 under Jason Dissanayake.