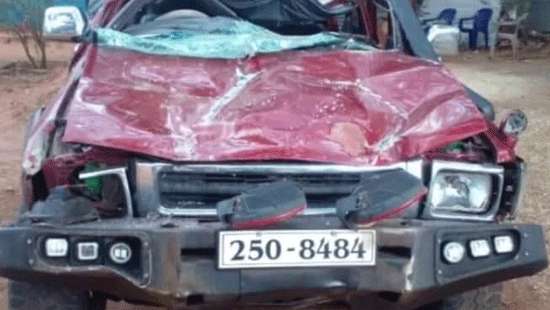 Following the elephant-cab accident at Thalawa in Anuradhapura, injuring three persons including veteran artiste Jackson Anthony, the elephant has not reportedly been seriously injured due to the accident, a wildlife official confirmed today.

“Some villagers had seen that the elephant had fled to the jungle and rejoined with its herd and apparently the elephant has not been fatally injured. But our team is already dispatched to locate the animal and treat it. Until we find the elephant, we cannot say how bad the injuries are,” the official told the Daily Mirror.

Actor Anthony and two persons were seriously injured after the double cab they were travelling in, hit a wild elephant at Thalawa in Anuradhapura, on Saturday night.

According to hospital sources, two bones of the neck of the actor have been dislocated, its membranes are damaged, and also both lungs are damaged. Due to the condition of his neck, he was transferred to Colombo,  a senior hospital spokesman said.

Two other people are currently being treated at the Anuradhapura Hospital and one of them is in the ICU. (Sunil Jayasiri)