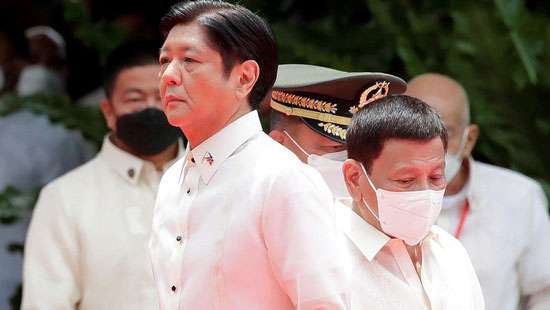 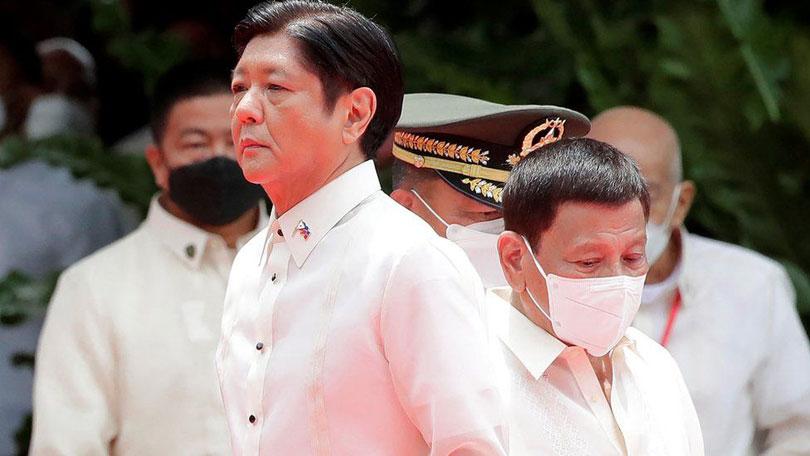 Ferdinand Marcos Jr has been sworn in as the Philippine president in a ceremony in Manila, succeeding the outgoing leader Rodrigo Duterte.

His inauguration marks a stunning comeback for the Marcos political dynasty, which was ousted after a popular revolt in 1986.

Sara Duterte, the daughter of the outgoing president, is being sworn in as vice-president.

Mr Marcos Jr took his oath of office at midday local time (0400GMT) in a colourful ceremony at the National Museum.

Flanked by his wife and three sons, he waved and smiled while observing a parade that featured an aerial display of jet fighters and march-pasts of Philippine's various uniformed personnel.

In his first speech as president, he thanked the crowd for delivering what he described as “the biggest electoral mandate in the history of Philippine democracy.”

The 64-year-old leader is inheriting a country still on the road to recovery from a years' long pandemic, and an economic outlook clouded by skyrocketing inflation and rising debt.

Some are also looking to Mr Marcos Jr to rehabilitate the country's image in the wake of Mr Duterte's term, which has been characterised by a bloody war on drugs policy and a tightening grip on press freedom.

The inauguration comes just a few days after the Supreme Court in Manila ruled that convictions for tax evasion did not disqualify the new president from taking office.

It also follows the announcement on Wednesday from a Philippines regulator that it was standing by its decision to shut down investigative news site Rappler – one of the few media outlets in the Philippines that is critical of the previous government.

During his inauguration speech, Mr Marcos Jr paid tribute to his late father – dictator Ferdinand Marcos – who ruled the Philippines for two decades with an iron fist.

Ferdinand Marcos Sr plunged the country into martial law and took control of the country's courts, businesses and media.

The army and police arrested and tortured thousands of dissidents and political opponents were murdered.

“I once knew a man who saw how little had been achieved since independence. He got it done,” Mr Marcos Jr said. “So will it be with his son. You will get no excuses from me.”

He repeated calls for “national unity” – a refrain that featured prominently during his campaign trail, before urging the crowd not to look back “in anger or nostalgia.”

Mr Marcos Jr's inauguration marks the culmination of a decades-long struggle by the Marcoses to reclaim their political glory.

Marcos Sr's rule ended in 1986, when a mass uprising saw millions of people take to the streets and the Marcos family – including a 28-year-old Bongbong – fled the country for Hawaii.

The long-time politician, who returned to the Philippines in 1991, has since sought to paint his father's presidency as a “golden period” of growth and prosperity.

Mr Marcos Jr's popularity was buoyed by an aggressive social media drive, which proved especially appealing to voters not old enough to have experienced the years of dictatorship first-hand.

Meanwhile, critics levelled accusations that his social media campaign was rife with misinformation and whitewashed atrocities under his father's rule. He has denied these allegations.

His election campaign was also boosted by having Sara Duterte as his running mate, merging two political dynasties' strongholds – the Marcoses in northern Philippines and the Dutertes in the southern Mindanao island. (BBC)