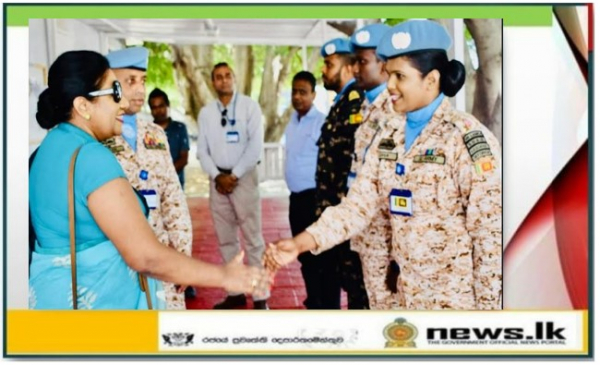 Ambassador of Sri Lanka to Lebanon Shani Calyaneratne Karunaratne, paid a courtesy call on Head of Mission and Force Commander Major General Aroldo Lâzaro at the Head Quarters of the UNIFIL (United Nations Interim Force in Lebanon) at Blue Line, in Naquara, on 21 June 2022.

They discussed matters of mutual interest which included increasing Sri Lankan troops at UNIFIL. The Force Commander stated that the Sri Lankan troops are respected for their outstanding professionalism and thanked them for their contribution to the UNIFIL for the past 11 years. Contingent Commander of 13th Force Protection Company (UNIFIL) Sri Lanka Lieutenant Colonel Nayan Samarakoon, and Attaché (Administration) of the Embassy Priyantha Dasanayaka also participated in the meeting.

The Ambassador was accorded a Guard of Honor and an inspection of troops and armored vehicles. A k9 demonstration and a concert by the Sri Lanka Army Calypso band was also held.