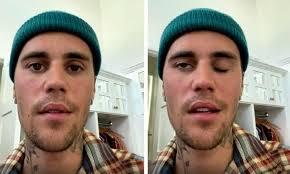 PinSinger Justin Bieber announced Friday that he is taking a break from performing because he is suffering from paralysis on one side of his face.

In a video posted on his verified Instagram account, the singer explained that he has Ramsay Hunt syndrome, which has left him unable to move half of his face and unable to take the stage.

In March, his wife Hailey Bieber was hospitalized due to a small blood clot in her brain.

The model later explained that she had suffered a mini-stroke due to a small hole in her heart from which the clot traveled to her brain.

She underwent surgery to close the hole which she said was between 12 and 13 millimeters. (CNN)