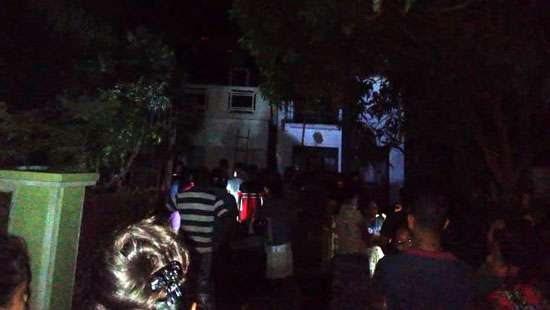 The house belonging to the owner of an IOC Filling Station at Ranajayapura in Ipalogama, Kekirawa was set on fire last night by an angry mob as the station ran out of fuel.

According to the Police, a large crowd gathered to get fuel on May 21 and some of them were not issued fuel as the shed ran out of fuel made the mob become furious and torched the owner’s house.

The suspects have set the two-story residential building ablaze, which said to be filling station owner's, located at Thilakapura, Ipalogama during the prevailing power cut at night.

The Police added that the wife and the two children of the station owner were at home when the house was burnt. Neighbours, villagers and the policemen from Ipalogama Police fought hard douse the fire and saved the residents.

The fire had caused severe damages to the house and properties including the schoolbooks, study equipment of the two school children as one of them will be sitting for the GCE Advanced Level Examination next year..

Ipalogama Police is carrying out investigations to arrest the suspects on the instructions of senior police officers in charge of the Anuradhapura division. (Kushan Jayawardana – Galkiriyagama)