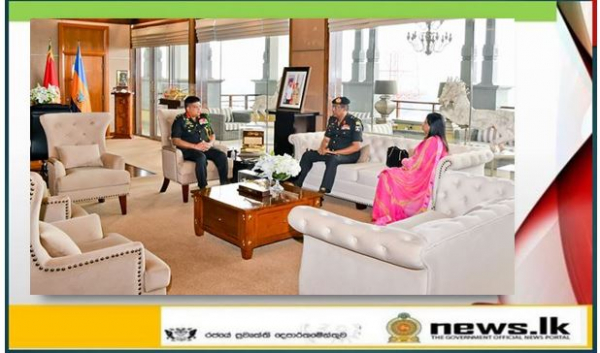 During his exemplary career, retiring Major General Harendra Ranasinghe who had served as an outstanding soldier of the elite Special Forces at his own will, remained a tower of strength to the Army and a beacon of hope for budding officers.

General Shavendra Silva, Chief of Defence Staff and Commander of the Army during the meet recalled his distinguished career as an infantryman of special calibre and spoke high of his battlefield gains and how he managed the troops.

” I find it extremely challenging to find a ‘match’ to replace you in your absence with your calibre, capacity, ability of command, tactical employment of troops par excellence, coupled with highest degree of loyalty and integrity. You were seriously injured thrice but you never wavered in spirits and wanted to free the country from terrorism. I remember well how Kilinochchi was captured in 1996 and also how Mullaittivu rescue operations were conducted posing a major setback to terrorists around the same year. So much so how you became a formidable strength in the liberation of Kilinochchi in 2008 as humanitarian operations were reaching final phases.

The Army Chief also did not forget to pay compliments for his contribution to the growth of the Special Forces and also the establishment of the 1 Corps Headquarters as the Reserve Striking Force. “You as one of the Senior Officers did your best for the best interests of the organization and very effectively managed with all the tasks, entrusted to you, no matter how trying they were. Coupled with your integrity, all those challenges were very well managed showing true traits of your leadership and valour. Those memories would serve an example to budding officers. Yours was a career of noteworthy milestones, memories and great gains in the battlefield.

The retiring Senior Officer’s spouse, Mrs Priyanthi Ranasinghe at the same occasion added special significance to the day’s final meet by presenting a special letter of appreciation and gratitude to General Shavendra Silva, in which she recalled excellent gestures of goodwill, comraderie and understanding shown by the incumbent Army Chief towards her husband, Major General Harendra Ranasinghe when he was spearheading the battle against terrorists. ” You showing true colours and traits of leadership stood by him in critical times under different commands and inspired him in an impressive manner. That was what he was made to be so today as a veteran, very much admired by both his peers and other ranks, ” she put her thoughts in the letter.

The Army Chief also during the interaction with the outgoing Senior Officer inquired into his future plans after retirement and shared a few thoughts with his spouse who was present at the occasion. Furthermore, General Shavendra Silva also inquired into the educational progress of their only child, domiciled in the US.

The outgoing Senior Officer also thanked the Commander of the Army for his wishes and the thoughtfulness while mentioning about the encouragement he received from the Army Chief in the performance of his duties. ” You as a role model to me inspired my career tremendously and it was your initiative which appointed me to serve as the first Colonel in the Sri Lankan embassy in Washington. You equally observed my skills closely and nominated me for various tasks and responsibilities of varying nature. Your inspiration drove us to success and you treated us like an own elder brother which I would never forget. My stint as Task Force Commander has left indelible memories and you facilitated us to take our own decisions as regards tactical operations and stood by us all the time, ” Major General Harendra Ranasinghe remarked.

Towards the end of the interaction, General Shavendra Silva awarded a special memento to the outgoing Major General Harendra Ranasinghe as a symbol of appreciation and commendation.

Major General Harendra Parakrama Ranasinghe is an Officer of Sri Lanka Army Special Forces. He was born on 18 March 1967 in Colombo and studied at Thurstan College – Colombo.

After completing his school education, he joined to the Sri Lanka Army is an Officer Cadet on 27 October 1986 and was Commissioned on 23 July 1987 and posted to the Gemunu Watch. In 1990, he voluntarily joined the Special Forces and followed Special Forces Basic Course No 07.

Major General Harendra Ranasinghe is a graduate of the National Defence College of India. He has also attended a number of military training courses locally as well as overseas in India, Pakistan, China, UK, Singapore and Jordan.

Major General Harendra Ranasinghe has been awarded two Gallantry Medals “Rana Wickrama Padakkama” and “Rana Shura Padakkama” for his valour and bravery in the battlefield in the face of terrorists. He continued to serve in operations despite being injured during direct confrontations with terrorists.

He is an Officer who has an impeccably consistent recorded service of 34 years maintaining a clean and an unblemished record of conduct. He is married to Mrs Priyanthi Ranasinghe and is blessed with a son.