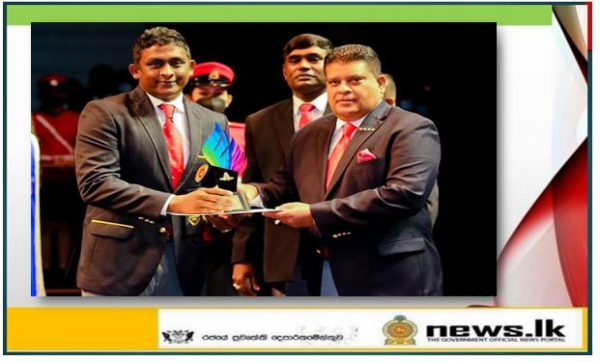 The Chief of Defence Staff and Commander of the Army, General Shavendra Silva, at the invitation of Major General Sampath Kotuwegoda, Colonel Commandant, SLA and Deputy Chief of Staff (DCOS) participated in the dazzling spectacle as the Chief Guest and inspired all those achievers.

The SLA, having produced a fine assortment of sportsmen and women to the Army throughout the past years took pride in appreciating the commitments of both retired and serving sportsmen during this ceremony after rewarding them with mementos and certificates.

The day’s Chief Guest, General Shavendra Silva, accompanied by Mrs Sujeewa Nelson, President, Army Seva Vanitha Unit on arrival at the theatre entrance was welcomed by Major General Sampath Kotuwegoda, Colonel Commandant, SLA and Deputy Chief of Staff (DCOS) before he was conducted to the main hall, together with several SLA Senior Officers, preceded by a bevy of Kandyan dancers.

At the outset, lighting of the traditional oil lamp, recital of the Artillery song and a two-minute silence in succession, as is the practice in all Army ceremonies, revered the memories of fallen War Heroes who laid their lives in defence of the country. The observance of silence signalled the onset of the remainder of the day’s proceedings.

The momentous event got to a start after the Colonel Commandant, Major General Sampath Kotuwegoda delivered the welcome note. Several scintillating and eye-catching spectacles of cultural, musical and historic themes, meticulously choreographed held the audience spellbound as the day’s agenda unfolded one by one to award Regimental and Army Colours to 248 SLA Officers and Other Ranks (both serving and retired) for their distinguished excellence in various fields of sports at different levels, i.e. Army, Defence Services, National and International spheres.

The day’s event reached its climax as the Chief Guest was invited to the stage to make the first segment of award of Colours to those SLA personnel who have excelled exceptionally well in sports at international level, representing the country in the past few years. A brief address of the day’s Chief Guest to the occasion highlighted the importance of sports to the organization and recognition of those challenging achievements of both national and international standards.

Prior to the Chief Guest’s departure, the Colonel Commandant presented an appreciative memento to the Army Chief. Mrs Sujeewa Nelson was received by Mrs Shamini Kotuwegoda, Chairperson, SLA Seva Vanitha Unit on arrival offering a bouquet of flowers.

The next segment of the proceedings saw the former Army Commanders, SLA Colonel Commandant and few other Senior Officers joined the stage for distribution of accolades to SLA achievers.