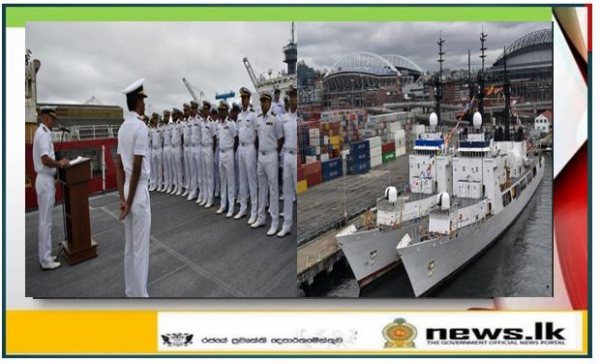 Sri Lanka Navy officially took the delivery of the EX-United States Coast Guard Cutter, USCGC Douglas Munro on 26th October under the pennant number P 627. The ship crew is currently undergoing training and engaged in acquisition formalities, maintenance, scheduled repairs and installations of the ship in US Coast Guard Base, Seattle

In accordance with the policy directives of Commander of the Navy, Vice Admiral Nishantha Ulugetenne, the celebratory events were held giving pride and place to naval traditions, religious rituals and Corporate Social Responsibility programmes. The ship’s crew led by the Commanding Officer (Desig) P 627, Captain Lanka Dissanayake took much interest in organizing these events.

An almsgiving and Pirikara Offering for Maha Sangha at “Sarana” International Buddhist Centre” in Seattle was carried out on 06th December. During this occasion prayers were invoked specially on fallen naval war heroes and those who were disabled in action. Further, blessings were called on Commander of the Navy, all naval personnel and their family members. On the Navy Day – 09th December, lunch was served to an institution run by the “Catholic Community Services” in Seattle.

The traditional meal partaking of ‘Badakana’ was also held with the attendance of USCG personnel including the Commanding Officer of the USCG Base, Seattle – Captain Ibrahim Khalil along with the officers and sailors of P 627.