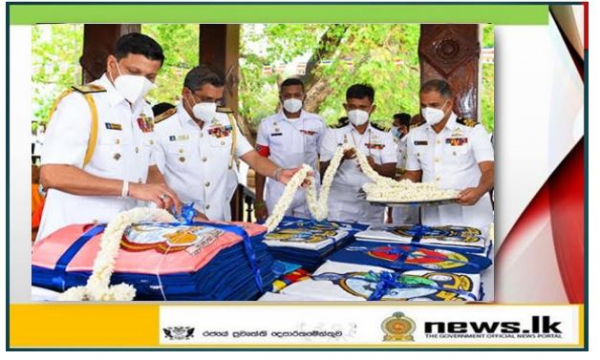 Following the directives and guidance of Commander of the Navy a range of celebratory events are conducted in each Naval Command, giving pride and place to naval customs and religious rituals. On the sidelines of these celebrations, capital ships of the Sri Lanka Navy will lay at anchor off the Galle Face Green and the ships will be there from 09th and 10th December, allowing the general public to catch the glimpse of naval power of Sri Lanka Navy.

As part of the religious segment of the 71st anniversary celebrations the ‘Kanchuka Puja’ and ‘Flag Blessing’ ceremonies were held at the Ruwanwelisaya and sacred Jaya Sri Maha Bodhi in Anuradhapura to receive the blessings. Meanwhile, permissible drink (Gilanpasa) offering was held at the Temple of the Sacred Tooth Relic in Kandy on 08th December, with the attendance of Commander of the Navy. (09th December), Commander of the Navy offered ‘Buddha Puja’ for Sacred Tooth Relic. Meanwhile, mid-day alms for the members of Maha Sangha have also been arranged as part of the series of religious proceedings.

Moreover, an all-night Pirith chanting ceremony and alms giving for 71 bhikkhus were held at the Welisara Naval Complex on 03rd and 04th December. During these Buddhist religious rituals merits were transferred on fallen naval war veterans and blessings were invoked on Commander of the Navy, naval personnel both serving and retired as well as their family members.

Similarly, the Christian Commemoration & Thanksgiving Service was held at St. Lucia’s Cathedral, Colombo, Hindu Puja at Shri Ponnambalawaneswarar Kovil and Islamic religious rituals at Jummah Mosque on Chatham Street. All these events were held adhering to COVID-19 protocols to prevent possibilities of the transmission of the pandemic.

The Navy celebrating its 71st anniversary today, traces its history from a long way back. The Naval Volunteer Force Ordinance No. 01 of 1937 planted the seed for the first naval force in the country as the ‘Ceylon Volunteer Naval Force’. The move was in line with a policy decision taken by the British during World War II regarding the protection of their colonies. The Navy Act No. 34 of 1950 marked the beginning of the Regular Naval Force of Sri Lanka with the establishment of the ‘Royal Ceylon Navy’ on 09th December 1950. The Royal Ceylon Navy, which has grown steadily since then, became the ‘Sri Lanka Navy’ on 22nd May 1972 when the country became a republic.

Although there is presently no visible enemy, the Navy acts as a major partner for the security of the Indian Ocean region. Thus, Sri Lanka Navy extends its fullest cooperation to curb illegal activities in the waters around the island, ensure maritime economic activities, and provide relief to the distressed naval and fishing community in the Sri Lanka’s Search and Rescue Region, in accordance with international conventions.

Since its inception Sri Lanka Navy has been on a distinguish journey, performing military, diplomatic and constabulary roles in Sri Lanka’s maritime zone, to prevent possible threats emanating from sea.

In this backdrop, Sri Lanka Navy steams ahead under the able leadership of Commander of the Navy, Vice Admiral Nishantha Ulugetenne and guidance of Commander in Chief of Armed Forces and His Excellency the President Gotabaya Rajapaksa with a view to achieve the national aspiration by maintaining island waters open, safe and secure. To perform the Navy’s designated role in the best interest of the nation, its well-organized workforce as well as naval fleet units and resources augment the First Line of Defence at all costs.