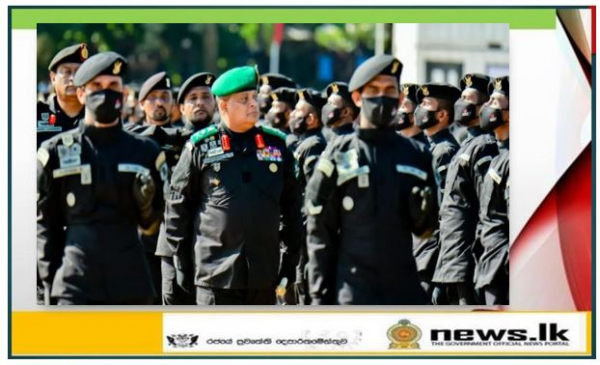 The eventful formal passing out parade (POP) of the best of the best and its ceremonials, held strictly adopting health guidelines, assumed greater significance with the arrival of General Shavendra Silva, Chief of Defence Staff and Commander of the Army as the day’s Chief Guest, to be received warmly by Major General Harendra Ranasinghe, Colonel of the Regiment, SF and Commander, 1 Corps, together with Colonel Prasad Randunu, Commandant, SFTS and the Parade Commander after General Shavendra Silva was honoured in a Guard Turnout at the entrance to the SFTS premises.

The event’s Chief Guest was then invited to review the day’s smart and colourfully-dressed parade closely and receive the salute of those SF undergraduates who would not hereafter hesitate to go where other troops fear to tread, scoping out potential threats, taking out strategic targets, and conducting daring rescue missions.

The proceedings of the ceremony set off as a helicopter hovering over brought down SF insignias and badges to be pinned on the day’s undergraduates. The Commander of the Army after the investiture of Special Forces badges at first to a representative group of the day’s passing out undergraduates, paved the way for Major General Harendra Ranasinghe, Major General Senarath Yapa, Commander, Security Forces-West and Brigadier Vipula Ihalage, Commandant, MSTS in succession to follow suit and pin the rest of those badges on those undergraduates. Swearing of the SF oath that followed after a while brought the day’s spectacle to new heights as the stage was set to pick the best in the Course.

Later on, the day’s Chief Guest was invited to award accolades and certificates to the best of the best in the Course No. 51. Lieutenant W.K.V Dinushaka who did exceptionally well enduring the incredible operations training tempo emerged the Best Student while both Best Gymnast and Best Shooter awards in the Course were presented to Lance Corporal H.W.I.V Lakshan. Both received kudos and trophies for excellence from the Army Chief, amid roars of applause as their names were read out.

General Shavendra Silva speaking out his mind delivered a brief address to those SF undergraduates, recalled heroic past of fallen and injured SF Heroes, and urged them to preserve their exceptional skills and the reputed glory of the SF at all times while committing to the country’s needs as national priorities. He reminded those graduates of the importance of their duties in future as a role model for the Nation in diversified settings and thanked the Regiment for inviting him to the occasion.

After tracing the history of the SF and how it came into being, the day’s Chief Guest commended the SF for its series of unmatched contribution to the security of the country and their unmatched sacrifices. Paying a glowing tribute to all fallen SF War Heroes, he commended parents and next of kin of those SF graduates who consented to their enlistment to the SF. He also spoke high of the support being given to the armed forces and their well-being by the government. The Chief Guest also paid a special tribute to all disabled and serving SF members and pointed out the dignity and pride, associated with the Special Forces, as a unique regiment. The conclusion of his brief speech saw the day’s Chief Guest being honoured with final compliments by the day’s graduates who saluted him again as the parade was set to march off.

Heroic members of the Special Forces (SF), founded in 1986 as a combat tracker team, and subsequently turned as one of the most elite and widely-admired units of the Army, have been rendering an invaluable service to the Nation since its founding and their exceptional tactful sacrifices during the final few years of the fight against LTTE terrorism, particularly with its Long Range Reconnaissance Patrol troops who have been recognized and famed as the most-feared, have been abundantly recognized and genuinely admired due to their covert operations rather than conventional combat.